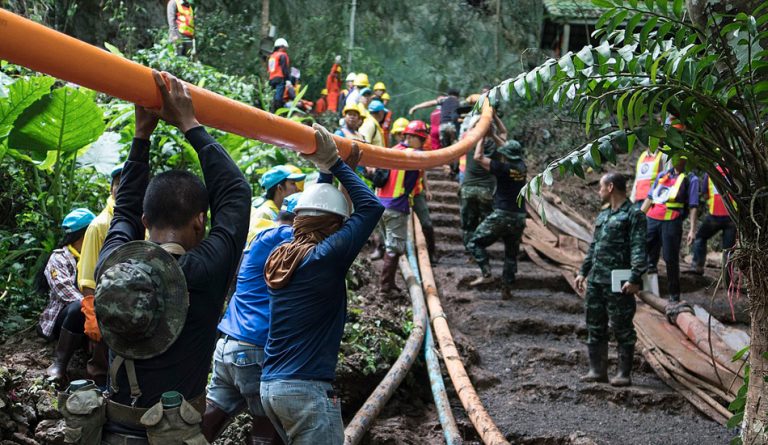 On June 23, 2018, the Wild Boars soccer team entered the Tham Luang cave in Chiang Rai Province, Thailand, to perform their monthly initiation ritual for new members. But an unforeseen flood trapped the 12 members of the team along with their coach inside the cave. For 17 days, the team members stayed in the cave, enduring hunger and thirst amidst the damning feeling that they may not make it out alive.

All eyes were set on the distressing situation in Thailand. People from over the world were praying, sending their hopeful messages through social media. Soon, it became a global effort that brought together experts and rescuers from different countries, including the United States, Japan, and Australia.

What happened is sort of a miracle. The rescuers eventually succeeded — the soccer kids and their coach managed to survive despite getting weak and hungry. The media had covered some facets of the cave mission, from the timelines to the rescue mission. But a chunk of the story wasn’t explored, especially the actual operation that unfolded within the cave. This is covered in the documentary 13 Lost.

Seeing the severity of the situation, Chiang Rai province’s Governor Narongsak Ossotanakorn called in the Thai Navy Seals — an elite branch of the navy that takes on the most dangerous missions. But despite their high competence, there was one problem — the Seals lacked training and knowledge in cave diving.

News regarding the Seals attempting to rescue the soccer team was all over the media. Distressed by the current plan, General Motors employee and experienced diver Ruengrit Changkwanyuen, aka Pae, reached out to the Seals and offered knowledge, proper equipment, and training.

Pae and his team of divers taught the Seals how to lay line underwater for visual guidance in the cave, communicate underwater, and other skills needed for the operation.

Days later, what started as a local mission blew into an international quest to save the 13 people. Joining the seals were several international diving experts, including Belgian diver Ben Reymenants. He described the difficulty of the diving experience. Inside the cave, it was hot and humid. The oxygen level was low and the waters twisted like a whirlpool.

Despite the combined efforts of the Seals and the volunteers, they had not made much progress because of the rising water level. The mission required more specialists and skilled divers to succeed.

At this point, members of the British Cave Rescue Council, including two of the world’s most experienced rescue divers — Brits John Volanthen and Richard Stanton — arrived at the site. The Seals pulled back and relegated themselves to back-ups as expert rescue divers took on the dangerous task.

The rescue efforts intensified, but got stuck at the crucial T-junction of the cave, which was the most difficult point of the rescue. During one hopeless, unsuccessful dive, Ben emerged from the murky water and chanced upon the Brits who were just about to dive.

“It’s not gonna happen,” he said, and they decided to call the mission off. They admitted to the Thai admiral that it was too dangerous. All hope of finding the missing kids and their coach seemed to have come to a dead end.

The admiral, still adamant to rescue the Thai boys, sent in the Seals for a final attempt. Some of the Seal team members were just 19 years old. This made Ben think twice. More young lives would be in danger. The least he could do was help them accomplish the impossible.

Ben and Ukrainian diver Maksym Polejaka took the helm to find a path past the T-junction. The current was strong and the visibility was poor underwater. As such, it was a tumultuous task for the two. At one point, they got stuck in a small space but managed to free themselves in the end. Finally, they went beyond the T-junction, found the way to Pattaya beach, laid the line for other rescuers, and went back.

They told the British team about the pathway past the T-junction. It took only one dive of 300 meters to reach Pattaya beach. Finally, Brits John Volanthen and Richard Stanton found the members of the soccer team. Another 10 days were spent bringing the 13 members back to the entrance of the cave.

13 Lost, directed by Raimund Huber, focuses on the small team that laid the line to accomplish the rescue mission.

Beginning from the myths surrounding the cave to the overview of the mission, Huber lays down the basics of the situation before setting out on the actual rescue. The fresh-from-the-cave footage provides the audience with an immersive experience of the difficult operation — the emotions, the struggle, and whatnot.

The film employs cave maps, dramatized sequences, and digital mapping of the cave to shed light on essential aspects of the narrative that needed visuals and imagination.

Huber takes Ben Reymenants — the experienced Belgian cave-diver who spearheaded the rescue mission along with Maksym Polejaka — to the front seat to curate his views of the operation. Supporting his experiences are interview clips from seasoned Ukrainian divers Polejaka and Vsevolod Korobov.