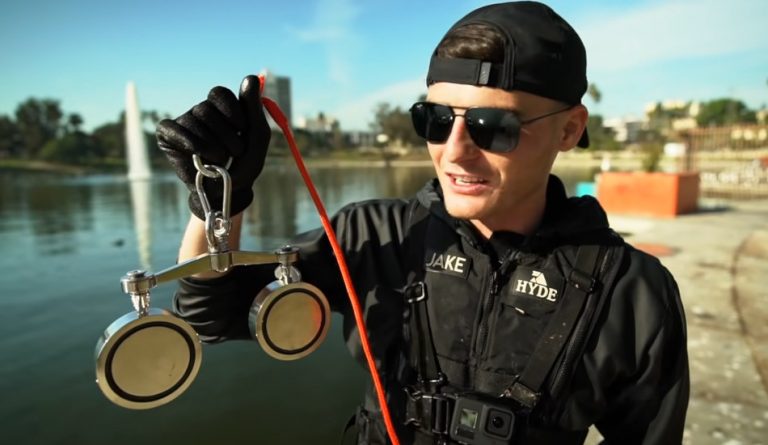 Neodymium magnets are used to pull metal objects out of a body of water. (Image: Screenshot / YouTube)

From electronic gadgets to jewelry, the stuff some people throw into rivers and lakes can be highly valuable. And the good news is, you can go out and collect that stuff through magnet fishing!

Magnet fishing is similar to fishing — you throw out a line, wait for something to “bite” your bait, then reel it in. The difference is that you’re aiming for valuable goods instead of fish. This activity is apparently becoming popular around the world.

A strong magnet called a neodymium magnet is needed for the job. Attached to a rope, the magnet is then dropped into a creek, river, lake, or other body of water where items made of ferrous metals (metals containing iron such as steel and cast iron) can be found. A neodymium magnet is 10 times stronger than your typical iron magnet and some can even hold up to 1,000 times their own weight.

Magnet-fishing.com says that the strength of the line must be double that of the magnet. So if your magnet has a 330-pound limit, then use a rope that can hold a weight of up to 660 pounds and above.

Nylon paracord works best in magnet fishing. It’s slightly elastic and holds knots very well. Be it on the side of the river or a bridge, a length of 50 to 100 feet is the optimal amount for the job.

Knotting the magnet to the rope is important too. A neodymium magnet can loosen from a typical knot. Magnet fishing experts suggest a standard fishing knot or an anchor knot to secure the magnet.

Finally, you need a pair of gloves to prevent injuries from tugging and pulling. You never know what you’ll find. So wear safety glasses to protect yourself from potentially sharp and rusty objects you might reel in.

First-time magnet fishers often make the mistake of fishing in the wilds. Though each body of water will have metals to some degree, the ones that are visited by the most number of people will obviously have the most “gems.” For instance, popular swimming spots tend to have treasures since many people accidentally drop items such as necklaces, rings, coins, and so on while swimming.

The most polluted areas, however, are the goldmines for magnet fishing. This includes heavily polluted lakes underneath a bridge or river in highly populated cities. This is because people tend to illegally dispose of their belongings in such places. Not only are you likely to have a great “catch,” but you also help to remove some junk from these bodies of water.

If you’re magnet fishing on private property, ask for the owner’s permission. Also, check up on your local laws first. In Europe, some areas like the rivers in England have remnant weapons from World War II, which are potentially dangerous. As for the U.S., no laws are known that prohibit the activity.

How to magnet fish

The technique you use to magnet fish depends on your location. If you’re planning to do the activity on a beach or any large body of water, the way to do it is to just throw the magnet as far as you can into the water. Walk parallel to the shoreline as you reel your magnet so you can sweep the bottom.

When it comes to areas that have lots of objects underneath such as dams and wells, dropping the magnet straight down is the best method. Once the magnet hits the bottom, try to swirl it to cover as much ground as possible before reeling it back in.