From the Earth’s Core: The Famous Hope Diamond 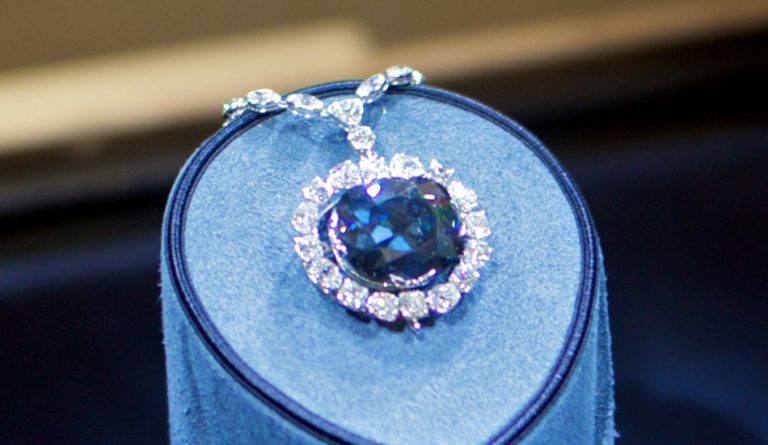 The Hope Diamond is one of the most famous jewels in the world. (Image: Julian Fong via Flickr)

The Hope Diamond is one of the most famous jewels in the world. Believed to have originated in India, it is currently exhibited at the National Museum of Natural History in Washington, D.C. A new report suggests that the Hope Diamond might have formed close to the planet’s core.

Close to the core

All natural diamonds are formed deep beneath the Earth’s surface, but far away from the Earth’s core. At best, regular diamonds are located about 90 to 125 miles below the surface. What is different about the Hope Diamond is that it is a “super-deep” stone according to a study presented at the Goldschmidt geochemistry conference. The research found a mineral called bridgmanite in diamonds of the same type as the Hope Diamond.

Bridgmanite is a common mineral that can be found on Earth. However, it does not exist in either the Earth’s crust or even the upper mantle. “What we actually see in the diamonds when they reach [the] surface is not bridgmanite, but the minerals left when it breaks down as the pressure decreases… Finding these minerals trapped in a diamond means that the diamond itself must have crystallized at a depth where bridgmanite exists, very deep within the Earth,” Evan Smith of the Gemological Institute of America said, as reported by Live Science.

The existence of bridgmanite means that the Hope Diamond formed in the region called the lower mantle, which is a fluid zone that starts from 410 miles below the Earth’s surface and extends to the liquid outer core. When it was first discovered, the Hope Diamond is estimated to have weighed 122.2 carats. Only after it was cut did the diamond pass through multiple collectors like the French Royal family before ending up at the American museum. Though the Hope Diamond itself was not studied, the researchers investigated a similar diamond from South Africa and discovered bridgmanite when examining it under laser light. The Hope Diamond is simply a larger version of this type.

In addition to the Hope Diamond, the researchers also found that the famous Cullinan Diamond also comes from the region between the lower mantle and outer core of the earth. A 124-carat stone called a CLIPPIR diamond, similar to Cullinan, was studied to arrive at the conclusion. The Cullinan Diamond holds the record for the largest diamond ever found, weighing a humongous 3,106.75 carats when discovered. The diamond was cut into smaller sizes, with one of the largest being a part of Queen Elizabeth II’s crown jewel collection.

Interesting facts about the Hope Diamond

The Hope Diamond has been the center of a controversy, thanks to a story about a curse that says anyone who owns it will eventually meet with misfortune. Many believe that the curse is a fantastical invention created to increase the appeal of the jewel and thereby raise its value. Some of the previous owners have gone bankrupt, been guillotined, been deposed, or suffered from diseases. However, many others have lived prosperous, uneventful lives. In fact, the Smithsonian Institute, which has owned the jewel since 1958, says that the diamond has brought them good luck.

The diamond got its name from Henry Philip Hope, one of the previous owners. The Hope Diamond is classified as a type of llb diamond, meaning that the stone usually looks blue in color. But when the light surrounding the diamond is extinguished, these diamonds will have a red phosphoresce after effect for about a minute or two. In fact, this is one of the ways an expert uses to confirm whether a specific diamond is an llb diamond or not.