General Huang Zhong Valued Honor Over His Own Life 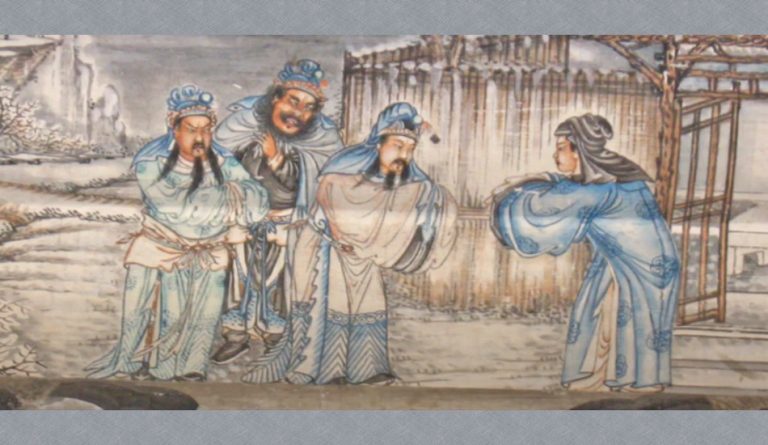 'The Romance of the Three Kingdoms' is a Chinese novel that describes an era in which a group of warlords divided China into several separate states. (Image: Screenshot / YouTube)

The Romance of the Three Kingdoms, one of the four great novels of ancient China, depicts the era in which a group of warlords divided China into several separate states and the wars that raged among them. This fictionalized account of that time is famous for its moral lessons of valor and righteousness.

Of course, the novel’s heroes had their villains to stand in contrast to. Huang Zhong, a skilled general serving Han Xuan, was a typical example of such a hero.

When general Guan Yu was ordered to attack Changsha, Han Xuan, the prefecture chief, ordered Huang Zhong to go out and meet him in battle as he observed from the gatehouse. The two men fought each other for one full day, with neither one giving ground.

The next day, the dueling between them continued for 50 or 60 rounds, but neither warrior could gain the advantage. The day ended without a victor.

The next day, the duel continued. Guan drew up the reins of his horse and spurred it forward to attack Huang. Huang readied himself and his horse to meet the onslaught.

As soon as Guan readied his long-handled spear and prepared to stab Huang, he suddenly heard a sound and saw that his opponent’s horse had stumbled, throwing Huang to the ground. Seeing this, Guan immediately held his horse back, raised his spear, and shouted: “I spare your life! Now, get back up!”

Huang immediately pulled his up horse, resaddled himself, and escaped through the gate.

Still watching from the gate tower, Xuan was shocked and asked why the horse stumbled. Huang said: “This horse hasn’t seen battle for a long time, so it made a mistake.”

Xuan said: “You are a master archer. Why don’t you shoot him with your bow?” Huang replied: “If I duel with Guan again, I will feign defeat, lure him to the suspension bridge, and shoot him.”

Han Xuan sent Huang a new horse. After expressing his gratitude to Han, Huang retreated and thought: “Guan was so magnanimous that he did not kill me. How can I shoot him? But if I do not kill him, it will be a violation of my orders.”

Huang contemplated this conundrum all night, unable to reconcile his inner conflict.

The next day at dawn, it was reported that Guan Yu stood waiting outside the gate to fight Huang Zhong again. As Huang led troops out of the gate to do battle, Guan Yu became anxious, as he had already spent two days fighting him and could not win. Still, he mounted his horse and got ready for the duel.

After fighting about 30 rounds, Huang feigned that he was weakened and fell back. Guan Yu gave chase. Huang remembered the favor that Guan offered him by not killing him the day before and did not shoot. Instead of taking out an arrow, he plucked the string of his bow, making a loud twang.

Guan Yu heard the noise of Huang’s bow and flinched instinctively, but saw that his enemy had not fired an arrow. He continued to pursue Huang Zhong, who plucked his bowstring again, before taking up a vantage point on the bridge. This time, Huang loaded an arrow, drew back his bow, and let the arrow fly straight at Guan Yu’s head.

The soldiers following Guan all gasped. But the arrow had not killed him. Instead, it hit his helmet tassel and fell harmlessly to the ground. Guan Yu picked up the projectile and headed back to camp. Reflecting on the engagement, he realized that Huang had first given him a warning, then purposefully targeted his tassel and not him.

It was to repay the favor from the other day’s duel.

A furious Han Xuan ordered his subordinates to detain general Huang Zhong, who protested his innocence.

Han replied: “I have watched you for three days. How dare to lie to me! Do you dare to lie to me? You didn’t fight hard the day before yesterday. Yesterday, you fell off the horse as it stumbled, and Guan didn’t kill you, which can only mean that you colluded with him. Today, you twice pretended to shoot him by plucking your bowstring, and the third time you only shot his helmet tassel. How dare you claim your innocence! If you remain alive, it will bring me nothing but trouble.”

The guards took Huang Zhong outside the gate and executed him. Many of Han Xuan’s officers protested, but he threatened them: “Anyone who wants me to exonerate Huang will be as guilty as he is!”

Huang must have known the consequences of not killing Guan. But he chose righteousness instead of his own life and secured a legacy for himself in the annals of Chinese history.

A more virtuous leader may have understood and sympathized with Huang Zhong and his inner dilemma. But Han Xuan did not have sufficient morality to perceive it. Had he opted to spare Huang Zhong, the righteous general would have remained loyal to him to the end.