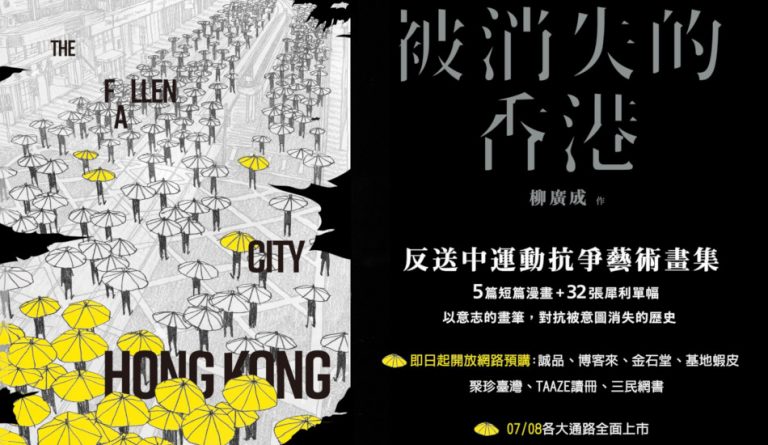 ‘The Fallen City: Hong Kong’ was officially published by Gaea Books in Taiwan on July 8. (Image: via Facebook)

In the summer of 2019, unrest was gripping Hong Kong on account of the controversial extradition act. At his home, Hong Kong cartoonist Liu Guangcheng was watching live broadcasts of the protest. One particular scene that disturbed him and made him break through his inner struggle was when he saw a first aid responder being fired upon by Hong Kong police using a beanbag round that pierced through her right eye. From then on, he realized he had to make a stand and use his artistic skills to spread the word about the protests to the rest of the world. He named his works “No Thugs, Only Tyranny” and they became widely circulated on the Internet.

The Fallen City: Hong Kong was officially published in Taiwan on July 8. It is Taiwan’s first collection of art paintings on the theme of the Hong Kong anti-extradition protests. The 200-page book contains 5 short pages of comics and 32 sharp single page sketches by Liu Guangcheng using a 5B pencil.

Liu’s works look refined and simple, but evoke strong emotions. His sketches say much more than a thousand words. They moved Cheng Li-chun, Taiwan’s former Minister of Culture, director Wang Xiaodi, chairman of the Taiwan National Film Center, Lan Zuwei of Taiwan, and other celebrities. They all recommend Liu’s works.

In recent years, 30-year-old Liu Guangcheng has been hailed by Hong Kong media as “a new superstar in the comic industry.” At the beginning of the anti-extradition protest, Liu was just one of the protesters who took to the streets. He always wore black clothes and walked silently with the protesters. He quit entering the “blue shops” that supported the police, such as McDonalds, Yoshinoya, and Genki Sushi in Hong Kong, and chose to patronize the “yellow shops” owned by local business people that supported the anti-extradition movement. Upon returning home, Liu would take off his black clothes and continue his normal work, drawing at his desk.

But after he saw Hong Kong police shoot the first aid responder in the eye, he was so deeply shocked that he decided to make a change. He revealed that if he had not made the decision on that day, he would not have produced his subsequent political works. In the postscript by the author of The Fallen City: Hong Kong, Liu describes the creative process for this series of works that spanned the entire Hong Kong anti-extradition protests for nearly one year.

Liu said he remembered during that year: “We have repeatedly been looking at the standard and bottom line of things until retreating to the point of no return.” He anxiously continued: “We had said to ourselves many times at the demonstration site that it is darkest before the dawn. However, one year later, not only has the dawn not arrived, the sky has become even darker.”

Using his real name for his works is a great breakthrough for Liu Guangcheng and he is not afraid. He mentioned that he hoped to use his communication power directly. Although it is relatively safe to create anonymous postings, the concern is that there is a lack of power and influence by doing things that way.

Liu said that by looking back at the scenes of the struggle in Hong Kong, one of the things that made him see hope is the artistic expressions by different artists. “Their expressions seem to be a strong injection for the people of Hong Kong, telling us that we are not alone and not weak. Imagine if artists like He Yunshi, Huang Qiusheng, Huang Xiaoming, Lin Xi, Ruan Minan, and others did not stand up using their real name but instead produced their works while lying low and using false names and false accounts, what would the atmosphere of today’s struggle be like? It would be hopeless. I am glad that they are not afraid of totalitarianism, willing to show their courage, and even go further to walk with Hong Kong people.”

Since then, Liu Guangcheng continuously draws various scenes of the resistance. He creates his own works, and at the same time draws what he sees and hears in the anti-extradition protest movement, as well as his imagination about the future.

After many attempts, Liu finally chose to draw with a pencil. He said that he likes pencils from 4B to 6B. Among them, the usage rate for the 5B pencil is the highest. To him, the 5B pencil is a tool that will reflect faithfully the scene in the drawing as there is not much room for modification. So he started to draw with a 5B pencil and then use the computer to do simple post-production.

Liu also did not conceal his pessimism about the future of Hong Kong. In October last year, he created a series on “Hong Kong in 2028” for the Hong Kong Ming Pao Sunday Special section. The future in this series is very sad, to the extent that it cannot be expressed in words. Facial recognition controls society and the books that you want to read can no longer be read freely. It sounds a desperate alarm, reminding the world: “If something precious is lost, it will be gone forever.”

One of his works depicts the monotonous daily grind of an office worker going to work, signing off work, returning home, and then going to sleep. The comic images get smaller and smaller, until the people inside seem to be squashed like bugs and they almost disappear. There is only one sentence in the full version of the comic: “Mortgage payments take more than 30 years,” meaning the worker must trade 30 years of labor in exchange for the small cage that houses him.

There was also a tender moment when Liu sketched the scene of his experience in Taiwan, listening to concerts on the walkway, feeling the sensation of free air, and having the joy of being able to sing freely.

Last year, Liu Guangcheng accepted an exclusive interview with a media reporter. The reporter asked Liu why the paintbrush in his hand became the paintbrush against extradition. Was it because artists have social responsibilities? Liu answered: “I think it is not the responsibility of an artist but the responsibility of a citizen. From a young age, our education system does not teach us to care about the things around us but just to instill in us to study hard, make money, and live well. Is that right?”

Looking at the current situation, after the National Security Law was passed, Liu again wrote: “The important thing is to live, but more important is, don’t forget to live with your original intention.”

‘The Fallen City: Hong Kong’ for readers in other countries

At the beginning of this year, Li Yalun, the editor-in-chief of Gaea Book’s Cultural Comics Department, met Liu at the invitation of Transocean Video. During the meeting, they decided to publish The Fallen City: Hong Kong. For Liu Guangcheng, the book contains sketches of Hong Kong’s times and it is also available for readers in Taiwan and other countries

Liu said: “I hope that through the paintings, before it is too late, we will tell the stories of our Hong Kong people to those who still live in freedom and equality and do not have to face totalitarian suppression. In addition to arousing the world’s attention to Hong Kong, I hope that people who are used to freedom and equality will be vigilant and participate more actively in their own society.”

As John Adams said: “You will never know how much it has cost my generation to preserve your freedom. I hope you will make good use of it.”