Why Is the Hong Kong Government So Afraid of Blank Paper? 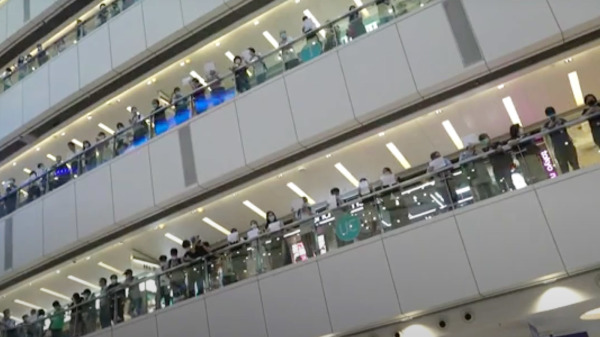 After the enforcement of the new National Security Law enacted by Beijing, Hong Kong people are still insisting on fighting for their rights. On July 6, the netizens launched a silent protest at the APM shopping mall in Kwun Tong.

During this period, riot officers entered the mall and intercepted multiple citizens, arresting five men and seven women. After being released the same day, Miss Lu asked the Hong Kong government why it was even afraid of a blank-white piece of paper?

Miss Lu said that she was treated courteously by the police while they detained her at the station, but the police confiscated her sweat towel with the American flag in her bag. She asked the Hong Kong government why it was afraid of a blank sheet of paper?

During the silent protest, many held up a white piece of paper one time near the police line of defense to test the authorities. Then the police asked her to go behind the defense line for investigation, during which she raised her hands and repeated that she gave her whole person to the Hong Kong government. Before being arrested, she poured out the contents of her bag onto the ground.

Miss Lu walked out of the police station, holding up a white paper at about 7 p.m. the same day.

The police charged Miss Lu with two counts of “unlawful assembly” and “hindering official business.” She stated that the case was still under investigation, and it was not convenient to disclose details. But she said that she “believed in the rule of law in Hong Kong, the Hong Kong police, and the SAR (Special Administrative Region) government, and she would cooperate with the investigation.”

Regarding the idea of being arrested, she said that there was nothing special about it. Being arrested was her original intention, and she did not mind dedicating her protest to Hong Kong.

Miss Lu stated that she was born and raised in Hong Kong, and her parents were also born in Hong Kong. She and her husband have been doing business in the mainland for more than a decade, saying that she “loves Greater China and supports the development of the mainland, which is not Hong Kong independence.”

Miss Lu hoped that Hong Kong voters would actively vote at the Legislative Council Elections in September. She said that if doing so, Hong Kong may still have a ray of light.