China to Sue Critic for Exposing Atrocities Against Uyghurs 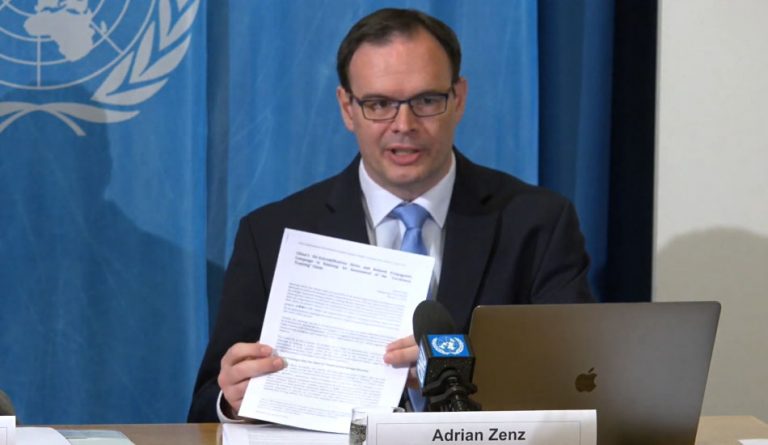 Beijing is apparently thinking of suing China expert Adrian Zenz for his recent report which brings to light the communist regime’s forced sterilization campaign targeting female Uyghurs. In an interview with Radio Free Asia, Zenz points out that the threat of a lawsuit is a clear attempt to prevent him from exposing the heinous activities of the Chinese Communist Party.

Suing Zenz for his article on the Uyghurs

After Zenz’s article became widespread on the Internet, it generated tremendous negative coverage against the Chinese government. Some have even proposed revoking China’s rights to host the 2022 Winter Olympics. The fact that Beijing is forcefully sterilizing innocent women in a bid to reduce the Uyghur population has made the Chinese government look monstrous among the public, something that Beijing is actively trying to avoid in the aftermath of the COVID-19 outbreak.

Zenz isn’t particularly worried about the lawsuit and believes that it might actually help the Uyghur cause by bringing their plight to the attention of a wider audience. He believes that the lawsuit is targeted at isolating him from his supporters.

“Discrediting they’ve already tried unsuccessfully, so this, I think, is more of an attempt at intimidation. It might be to intimidate me, but perhaps it’s even more designed to intimidate others — intimidate others from being involved with me or collaborating. I think it could be a strategy to isolate me,” Zenz said to Radio Free Asia.

The possibility of a lawsuit against Zenz was first reported by China’s state-backed media outlet Global Times, which also attacked him for “spreading lies.” In the past, Global Times has tried to discredit Zenz as a covert CIA operative.

Zenz feels that since none of these accusations have succeeded in making him stop criticizing the Chinese government, Beijing is under immense pressure and has therefore decided to try out legal means of controlling him. Though he was initially surprised that China is considering a lawsuit, Zenz soon realized that Beijing has been pushed to do so since they are losing the propaganda war over Xinjiang Uyghurs.

Zenz also believes that the only way to make Beijing stop exploiting Uyghurs for forced labor is if China starts to suffer economic losses. When companies start shifting operations away from China and when international consumers begin shunning products from China, the country will eventually suffer economically. This can empower Chinese citizens to stand up against the government. The Chinese Communist Party will find it very difficult to manage a huge uprising of people fed up with the loss of jobs and lack of freedom.

Recently, the U.S. imposed sanctions on a few Chinese officials for their involvement in abusing Uyghurs. The sanctions include banning their visas and freezing assets held in the U.S. In retaliation, the government of China has announced sanctions on American politicians, including Ted Cruz and Marco Rubio. However, it was not announced what the sanctions would entail. A spokesman for the foreign ministry Hua Chunying asked that the U.S. withdraw its “wrong decision.”

Though China deems the move as retaliatory, there is clearly a huge moral difference between the sanctions of the two nations. While the U.S. sanctions are targeted at people who have violated human rights, China’s sanctions are against people who are not involved in any human rights abuses. The only reason Ted Cruz and Marco Rubio are being sanctioned is that they spoke up against the Chinese communist regime.