Why Is There Pink Ice in the Alps? 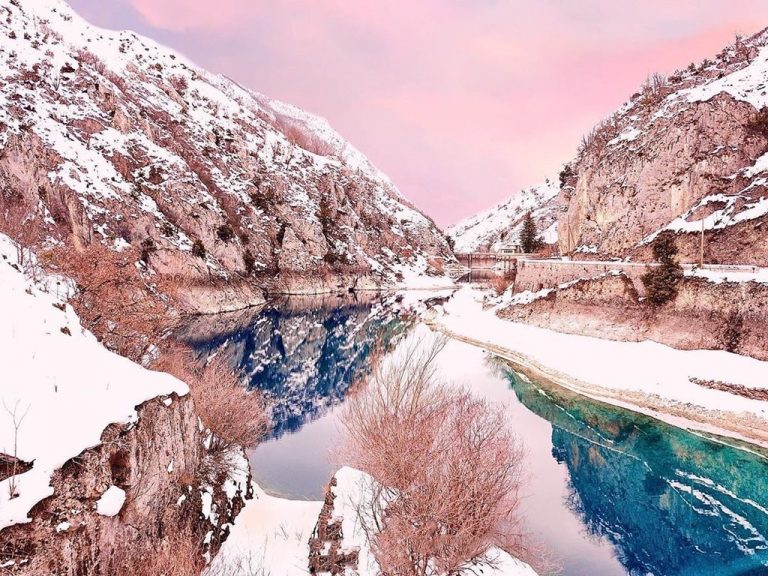 The Alps are starting to blush, showcasing pink ice and snow the likes of which we've never seen before (imageL via wikipedia)

When we think of ice, most of us picture one of three things, but one of them is probably not pink ice. You might think of the clear chunks of frozen water floating in your drink. You could imagine massive glaciers and icebergs with their brilliant whites and blues. You may curse the black ice that forms on highways during the winter. Whatever you think of when you hear the word ice, it’s usually not something you associate with the color pink.

Satellite imagery of the Alps may change what you imagine when you think of ice. Any way you look at it, it’s not pretty.

Emerging from the pink ice

If you looked at the ice of the Alps a couple of years ago, you’d see bright white landscapes stretching as far as the eye could see. This year, those same slopes look a little bit different. The stark mountaintops are starting to blush, showcasing pink ice and snow the likes of which we’ve never seen before.

The pink color comes from a type of algae native to Greenland’s Dark Zone. This alga, originally thought to be Ancylonema nordenskioeldii, grows and thrives in this otherwise inhospitable environment. Researchers first discovered it in the late 1800s in the Arctic Circle. New samples show that it’s more likely to be Chlamydomonas nivalis, an alga that grows in the snow instead of glacier ice.

While a frozen pink landscape might sound intriguing, it’s a sign of a more significant problem — one we should really be worried about moving into the second half of 2020.

The impact of climate change

Ice is naturally reflective. Under normal circumstances, it reflects upwards of 80 percent percent of the sun’s radiation. While this doesn’t prevent it from melting in the sun, it does slow the process down considerably. That’s why you’ll see snow and ice persisting even on the sunniest days.

Adding algae to the mix — even in the pale pink that we’re currently seeing in the Alps — serves to darken the ice. This removes its ability to reflect sunlight, causing it to melt faster. Then, in turn, the melting ice provides more air and water to the algae, triggering a bloom and allowing it to spread even further. It’s a vicious cycle that must be stopped.

We’re seeing the worst impact from this alga on the Presena glacier in Italy. This glacier is already at risk. In fact, local conservationists are covering its surface with light-reflecting geotextile fabric to keep it from melting during the summer.

Unlike other algae blooms like the Red Tide that happens around the Florida coastline every year, the pink algae aren’t inherently dangerous. These blooms occur every year naturally. However, thanks to increasing temperatures, the glacier is already at risk, and the alga is adding to it.

The ice turning pink in the highest reaches of the alps makes us wonder: Is the damage caused by climate change becoming irreversible? Some researchers seem to think so. One recent study believes that this is just the beginning. Scientists predict that two-thirds of the ice in the Alps will be gone by 2100 — only 80 years from now. Half of it will vanish by 2050.

Our carbon dioxide waste might not be the only cause of climate change, but our refusal to take action is leading to the point of no return. Climate change experts gave us a deadline — reducing our CO2 emissions by 55 percent by 2030 and by 100 percent by 2050. The way things are going right now, we’re not going to meet that deadline in 10 years. We might even make things worse before we get there.

What changes do we need to make?

What changes do we need to make to save the Alps glaciers and keep the damage we’ve caused from becoming irreversible? Much of the world is already moving in the right direction. We need to reduce our collective CO2 output with the goal of limiting overall planetary warming to 2.7°F. Most of the world understands this, but some stubborn countries decided to opt out of the 2015 climate accords designed to outline the most pressing and necessary changes.

In theory, we can reduce our impact on the planet. If we started right now and made all the big changes, we could even prevent the damage from becoming irreversible. If we don’t change our ways, there won’t be much left for us to enjoy. We’ll face a mass extinction by 2050, and the catastrophic collapse that will follow. It’s vital to take action now to prevent this bleak future.

Will we see more pink ice in the Alps in the future? Unfortunately, the answer to that looks like it will be a yes. Even natural events are making things worse, and humanity’s aversion to change will only serve to compound the problem. We’ll likely be seeing a lot more pink ice, bleached coral and things that are the wrong color as the years pass and we get closer to the 2050 deadline.

We can stop the cascade failure, or at least slow it down, but we need to start making changes immediately. If we wait much longer, pink ice in the Alps will be the least of our problems. The future is our responsibility, and we need to start fixing our mistakes and reversing the damage we’ve done to this little blue marble that we call home.