The Threat Posed by the Chinese Communist Party (CCP) 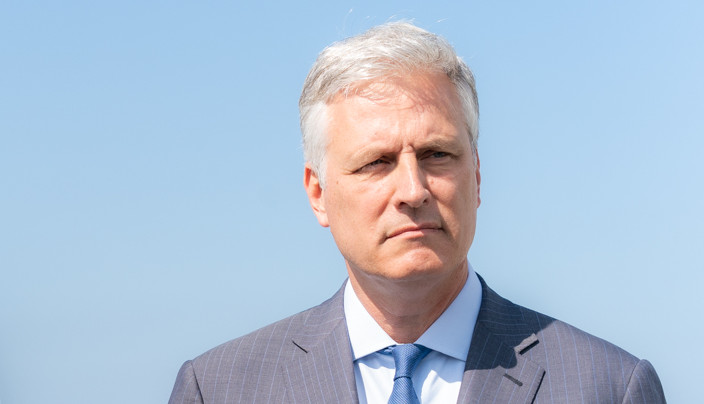 Robert O'Brien, National Security Advisor, believes that the U.S. has finally woken up to the threat posed by the Chinese Communist Party. (Image: The White House via Flickr)

Robert O’Brien, National Security Advisor, believes that the U.S. has finally woken up to the threat posed by the Chinese Communist Party (CCP) to the American way of life thanks to the Trump administration. For decades, the conventional idea was that China would eventually become more open as time passed by, first economically and then politically. This view was held by American political parties, businesses, media, and academia. Under this assumption, the U.S. welcomed China as a member of the World Trade Organization in 2001 by agreeing to huge concessions.

Even when the negatives of such a lopsided trade policy were pointed out, it was downplayed due to the belief that the positives would eventually be worth it. As a result, the American government turned a blind eye to China’s human rights violations and its practice of technology theft, which severely affected several sectors of the U.S. economy.

Unfortunately, all the positive expectations have turned out to be false hopes. “We could not have been more wrong. And this miscalculation was the greatest failure of American foreign policy since the 1930s,” O’Brien says in a speech (YouTube). He highlights some of the dangers posed by the CCP.

The threat posed by the CCP

The Party mandates study sessions on communist ideology, with members required to download apps that teach “Xi Jinping thought.” All content generated inside China is censored as per Party interests, removing any scope of independent thought or criticism. Anyone who speaks contrary to the communist ideology is jailed. Between January 1 and April 4, 2020, Beijing charged almost 500 people with criminal activity just for speaking honestly about COVID-19.

The CCP has invested billions to spread propaganda overseas. Almost every Chinese language media outlet in America is either owned by the CCP or has close ties to the Party. The communists are also making inroads into English language media. In the TikTok app, accounts that criticize the CCP are deleted or removed. China also succeeded in making many Americans believe its propaganda that the U.S. was responsible for unleashing the coronavirus in China and the world.

The communist regime is reinterpreting religious texts like the Bible so as to have control over Christians. Millions of Muslim Uyghurs have been locked up in detention centers. Minorities are forced into labor while their children are indoctrinated with communist ideology so as to destroy any ties with their culture.

China has succeeded in pressuring Hollywood and American film companies to self-censor their content in order to profit from the Chinese market. The regime is collecting personal data of Americans, including their social media posts, health records, whereabouts, purchases, and so on. In 2014, the CCP hacked into Anthem Insurance and stole data pertaining to 80 million Americans. In 2017, Equifax was hacked and the data of 145 million Americans was compromised. Last year, the CCP stole data of 383 million people who were customers of Marriott.

The Trump administration has taken strict action to protect American citizens from the above-mentioned dangers posed by the CCP. For instance, the government has blocked Chinese companies like Huawei from working in the country so as to protect private and government data. The administration classified nine Chinese state-backed media outlets as foreign missions to minimize their propaganda activities in the U.S.

The United States has imposed export restrictions on 16 Chinese companies and 21 Beijing-backed entities involved in human rights violations. President Trump pulled America out of the UN Human Rights Council and the World Health Organization due to their excessive support of the CCP. Also, Washington has limited the availability of student visas to Chinese nationals in order to reduce the risk of espionage.