Top 5 Things to See in Zhangjiajie 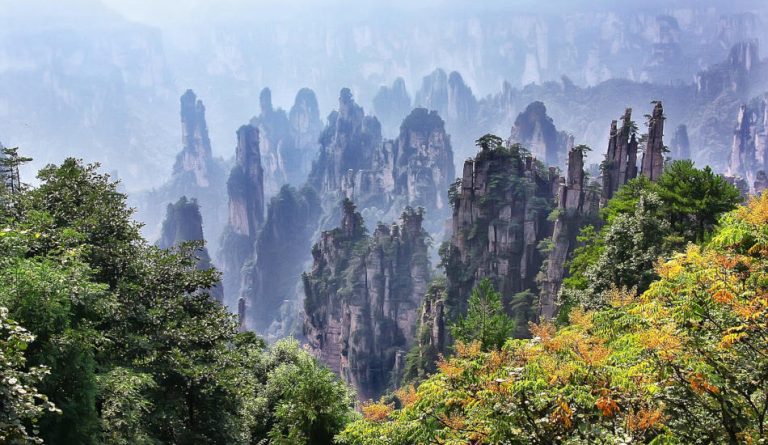 Located in Central China, Zhangjiajie is well known for its mountain peaks, which number more than 200. (Image: YHBae via Pixabay)

Located in Central China, Zhangjiajie is about 600 miles away from Hong Kong. The region is well known for its mountain peaks, which number more than 200. Here are five places you need to check out in Zhangjiajie.

Are you a fan of the 2009 movie Avatar who was blown away when watching the famous floating mountains? These mountains were actually inspired by real-life pillars located in the Zhangjiajie National Forest Park. Originally called the “Southern Sky Column,” authorities changed the name to “Avatar Hallelujah Mountain” after the movie became a blockbuster and people started flocking to the site. There are more than 3,000 vertical pillars in Zhangjiajie, mostly formed by erosion. Almost 30 million tourists visit the place each year.

The Zhangjiajie Glass Bridge is the longest and tallest glass-bottomed bridge anywhere in the world. “Designed by Israeli architect Haim Dotan, [it] is suspended about 300 meters above the Grand Canyon [of Zhangjiajie]. The construction of the bridge began in 2014 and officially opened to the public on August 20, 2016… The bridge, supported by 4 pillars at the edge of the canyon, is made of tempered glass panels. Each of these panels is 2-inches-thick and weighs 1.5 tons,” according to China Travel. Only about 600 to 800 people are allowed on the bridge at a time.

Located in Hunan Province, Tianmen Mountain is often considered one of the most beautiful in the world. Tianmen Cave is a 100-foot-wide water-eroded hole located between two peaks and is popularly known as the “Stairway to Heaven.” In ancient times, the place held huge religious significance. You will need to walk 999 steps to get to the top. If you don’t want to put in the effort, just take the world’s longest cable car ride to get to the summit. The ride covers 4.3 miles and takes 30 minutes to complete.

Situated about 5 miles from Tianzi Mountain, Baofeng Lake is 246 feet deep. Two small islands are located on the lake. People usually take a boat ride to explore the place. There are about 20 scenic spots you can enjoy in the region, including the “Flying Waterfall,” “Thin Strip of Sky,” and so on. If you like hiking, the mountains surrounding Baofeng Lake are worth checking out.

Translated as “Yellow Dragon” cave, Huanglong is a karst cave that is rated as a “4A scenic area” by the state. There are 13 halls and an underground river in the cave. In the Maze Palace hall, you can explore stunning natural cave formations like stalagmites, stone coral, stone flowers, stalactites, and so on. One of the largest stone waterfalls is located in the Tianxian Palace hall.

Almost all major cities in China offer flights to Zhangjiajie Airport. Once you reach there, you only need to take a short 2.5-mile ride to Zhangjiajie city. You can settle down in a hotel and then go visit the destinations. Within the city, taxis are the best option to get around.

The best time to visit Zhangjiajie would be the September to October period during early autumn. If you plan your trip for this time period, it should give you some stunning views of the mountaintops covered in fog.