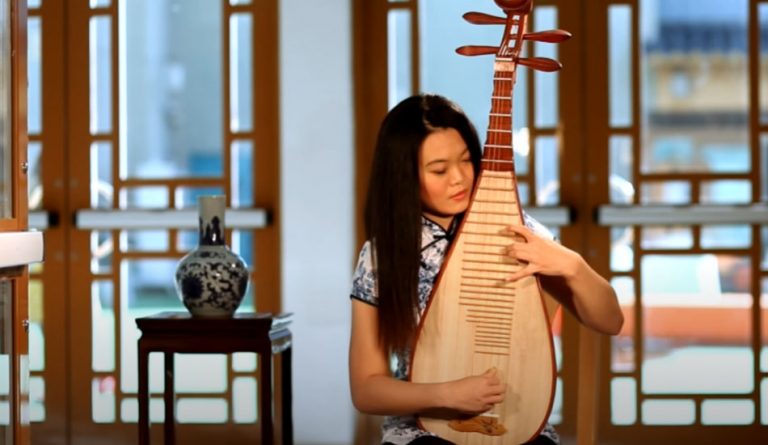 The pipa is a pear-shaped instrument. (Image: YouTube/Screenshot)

The pipa is a plucked 4-string Chinese musical instrument that is easily identifiable by its pear-shaped wooden body. Often called the Chinese lute, the frets on a pipa range from 12 to 26. A video by Shen Yun explores this instrument in detail.

Some people tend to make the mistake that a pipa is similar to a guitar since they are plucked instruments. However, both are quite different from one another. For instance, a pipa is usually held vertically while playing in contrast to a guitar, which is often held at an angle. While a guitar is played with guitar picks, a pipa is played with finger picks. The name pipa comes from the Chinese words “pi” and “pa,” where “pi” stands for forward plucking while “pa” stands for backward plucking.

Hence, the name pipa essentially means an instrument that can be plucked both forward and backward. In fact, these two movements make up the foundational knowledge when one starts to learn to play a pipa. Traditionally, the instrument is made completely from wood, with the front part using Chinese parasol trees and the back portion using sandalwood or mahogany. Pipa players typically use all 10 fingers to play the instrument. As such, they have a wide range of techniques for playing the instrument.

Once a person masters forward and backward plucking, they move to learn to strum the instrument. Next, the player learns about tremolo. When performing tremolo on a pipa, the player can use the thumb to play the accompaniment. A player can also bend notes in both directions. Though a pipa looks like an instrument that is used to play gentle, feminine music, it can easily be used in dramatic, forceful, masculine music as well. One famous pipa work called Ambushed On All Sides narrates the story of a general on a battlefield.

Wu Man is a Grammy-nominated pipa player who feels that the instrument is not appreciated more among modern audiences. “We have to open doors to keep this instrument alive… You want to keep the traditional form but you can also push the envelope to see how we can do other things for the next generation. I think this instrument is such a treasure for all cultures… It’s just a cool instrument, and I want people to know that… a pipa can play not only the traditional Chinese repertoire, but it fits into so many genres… I’ve worked with so many musicians, from Mexican guitarists to banjo players. Music is music — the instrument is just the way you can express,” she said to WFMT.

The pipa is believed to have been introduced into China from India in about 346 to 356 CE. The instrument is thought to have originated in Persia. A smaller pipa-like instrument from India was popular in China around the 4th century BCE. This one had 5 strings. However, it disappeared after the Tang Dynasty ended.

Originally, a pipa only had about 4 frets. This increased to around 14 to 16 frets during the Tang period. In the 1920s and 30s, several musicians experimented with pipas with 24 frets, which is the version that is popular in modern times. A higher number of frets allow the player to have better control over the pitch of the instrument. The traditional pipa had a range of about 3 octaves. Some of the instruments in Southeast Asia and East Asia are derived from the Chinese pipa. This includes Korea’s bipa and Japan’s biwa instruments.