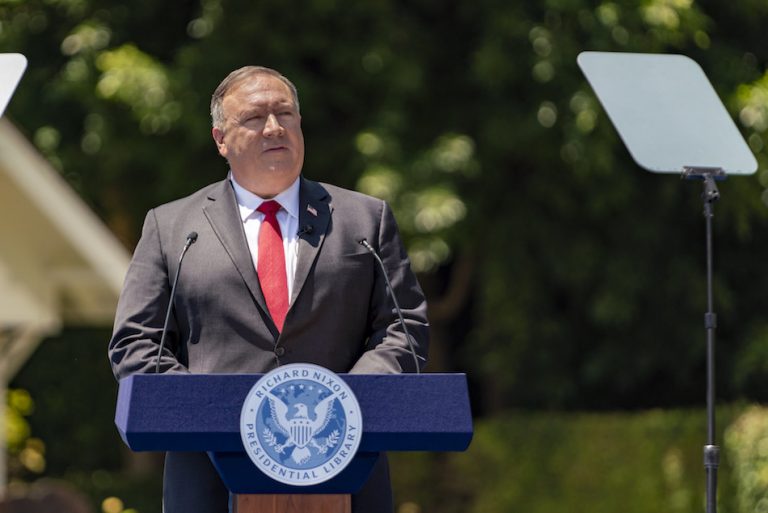 This is the first in a two-part series on U.S. Secretary of State Michael Pompeo’s speech at the Richard Nixon Presidential Library in California on July 23. Part 2 can be accessed here.

U.S. Secretary of State Michael Pompeo has urged free nations of the world and the Chinese people to join America in dealing with the threat posed by the Chinese Communist Party.

Speaking at the Richard Nixon Presidential Library in California on July 23, Pompeo said his remarks were the fourth in a series with others given by National Security Advisor Robert O’Brien, FBI Director Chris Wray, and U.S. Attorney General Barr.

He said his goal was to summarize what the China threat means for the U.S. economy, for America’s liberty, and for the future of free democracies around the world.

The failure of blind engagement

“Next year marks half a century since Dr. Kissinger’s secret mission to China, and the 50th anniversary of President Nixon’s trip isn’t too far away in 2022,” Pompeo said. “The world was much different then.”

Pompeo said that Americans had back then imagined engagement with China would produce a future bright with courtesy and cooperation.

“But today — today we’re all still wearing masks and watching the pandemic’s body count rise because the CCP failed in its promises to the world. We’re reading every morning new headlines of repression in Hong Kong and in Xinjiang,” he said.

Pompeo talked further on how China hadn’t evolved as had hoped and that “the old paradigm of blind engagement with China simply” had failed.

The Secretary of State spoke of President Nixon’s legacy in opening up China while adding he wanted to clarify that the 37th president of the U.S. did what he believed was best for the American people at the time.

Nixon formed U.S. diplomatic relations with the People’s Republic of China via a string of contacts that involved a visit to the Chinese capital Beijing in 1972

“He was a brilliant student of China, a fierce cold warrior, and a tremendous admirer of the Chinese people, just as I think we all are,” Pompeo said.

“He deserves enormous credit for realizing that China was too important to be ignored, even when the nation was weakened because of its own self-inflicted communist brutality,” he said.

Pompeo pointed out that Nixon — who was president from 1969-74 — sought to “induce change” in China.

“He nobly sought a freer and safer world, and he hoped that the Chinese Communist Party would return that commitment,” he said of Nixon, who died in 1994.

Pompeo went on to say how subsequent policies of the U.S. and other free nations resurrected China’s failing economy, only to see Beijing bite the hands that fed it.

“We opened our arms to Chinese citizens, only to see the Chinese Communist Party exploit our free and open society. China sent propagandists into our press conferences, our research centers, our high schools, our colleges, and even into our PTA meetings,” Pompeo said.

“We marginalized our friends in Taiwan, which later blossomed into a vigorous democracy,” he said.

“We gave the Chinese Communist Party and the regime itself special economic treatment, only to see the CCP insist on silence over its human rights abuses as the price of admission for Western companies entering China,” he added.

Pompeo spoke of how National Security Advisor Robert O’Brien’s earlier speech gave the examples of Marriott, American Airlines, Delta, and United all removing references to Taiwan from their corporate websites, so as not to anger Beijing.

Pompeo added that: “Hollywood … the epicenter of American creative freedom, and self-appointed arbiters of social justice, self-censors even the most mildly unfavorable reference to China.”

“This corporate acquiescence to the CCP happens all over the world, too,” he added.

Pompeo gave examples of how such “corporate fealty” has worked out.

“China ripped off our prized intellectual property and trade secrets, causing [the loss of] millions of jobs all across America,” he said. “It sucked supply chains away from America, and then added a widget made of slave labor. It made the world’s key waterways less safe for international commerce.”

Pompeo went on to deliver a line that many media have picked up on since his speech.

“President Nixon once said he feared he had created a Frankenstein by opening the world to the CCP, and here we are,” he said.

“Now, people of good faith can debate why free nations allowed these bad things to happen for all these years. Perhaps we were naive about China’s virulent strain of communism, or triumphalist after our victory in the Cold War, or cravenly capitalist, or hoodwinked by Beijing’s talk of a ‘peaceful rise,’” he said.

“[T]oday China is increasingly authoritarian at home and more aggressive in its hostility to freedom everywhere else. And President Trump has said: enough.”

Pompeo said that he believed that most people on either side of the political aisle disputed what he was saying.

“But even now, some are insisting that we preserve the model of dialogue for dialogue’s sake,” he said.

“Now, to be clear, we’ll keep on talking. But the conversations are different these days. I traveled to Honolulu now just a few weeks back to meet with Yang Jiechi,” Pompeo said, referring to the CCP Politburo member considered China’s top diplomat.

“It was the same old story — plenty of words, but literally no offer to change any of the behaviors,” Pompeo remarked about the 7-hour meeting that included discussions on the need for full transparency and information sharing to combat the COVID-19 pandemic.

“Yang’s promises, like so many the CCP made before him, were empty. His expectations, I surmise, were that I’d cave to their demands because frankly, this is what too many prior administrations have done. I didn’t, and President Trump will not either,” Pompeo said.

He went on to describe why Americans can no longer ignore the ideology that drives Beijing.

“As Ambassador O’Brien explained so well, we have to keep in mind that the CCP regime is a Marxist-Leninist regime. General Secretary Xi Jinping is a true believer in a bankrupt totalitarian ideology,” he said.

“It’s this ideology, it’s this ideology that informs his decades-long desire for the global hegemony of Chinese communism. America can no longer ignore the fundamental political and ideological differences between our countries, just as the CCP has never ignored them,” he said.

With China, Pompeo says to distrust and verify

Pompeo then explained why his experience in the House Intelligence Committee, as CIA director, and now two-plus years in his current position led him to understand that America must react to how the CCP behaves, not what it says.

“The only way to truly change communist China is to act not on the basis of what Chinese leaders say, but how they behave. And you can see American policy responding to this conclusion. President Reagan said that he dealt with the Soviet Union on the basis of ‘trust but verify.’ When it comes to the CCP, I say we must distrust and verify,” he said.

Pompeo went on to say what freedom-loving nations need to do about China. “We must induce China to change in more creative and assertive ways because Beijing’s actions threaten our people and our prosperity,” he said.

“We must start by changing how our people and our partners perceive the Chinese Communist Party. We have to tell the truth. We can’t treat this incarnation of China as a normal country, just like any other,” he said.

“We know too that doing business with a CCP-backed company is not the same as doing business with, say, a Canadian company. They don’t answer to independent boards, and many of them are state-sponsored and so have no need to pursue profits.”

“We stopped pretending Huawei is an innocent telecommunications company that’s just showing up to make sure you can talk to your friends. We’ve called it what it is — a true national security threat — and we’ve taken action accordingly,” Pompeo said of Huawei, which was recently named by the Trump administration as one of 20 companies owned or controlled by the Chinese military operating in America.

“We know too that if our companies invest in China, they may wittingly or unwittingly support the Communist Party’s gross human rights violations,” Pompeo said. “Our Departments of Treasury and Commerce have thus sanctioned and blacklisted Chinese leaders and entities that are harming and abusing the most basic rights for people all across the world. Several agencies have worked together on a business advisory to make certain our CEOs are informed of how their supply chains are behaving inside of China.”