The Wisdom of Socrates (and How He Died) 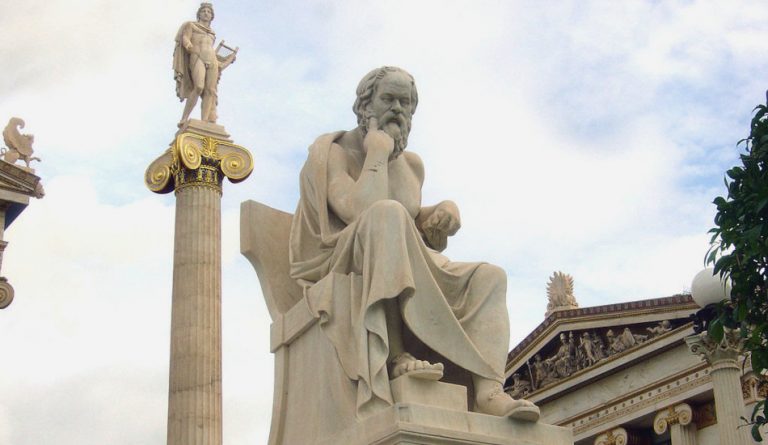 Socrates is considered to have been wise because he knew nothing but did not carry the presumption of knowledge. (Image: DIMSFIKAS via wikimedia CC BY-SA 3.0)

The “refined” nobles of Athens often looked down upon Socrates. Socrates did not dress up like them; he wore no footwear; he wasn’t wasteful or extravagant when it came to food and he never accepted money from his disciples. One day, a wealthy man by the name of Antiphon came across Socrates. He looked down upon the state of Socrates and mocked him, saying that even a servant would dress better than the great philosopher.

Socrates replied that his pleasures were not momentary; they were unlike the earthly desires of wealth, fame, lust, and other things man goes after. He told Antiphon that his happiness came from constantly improving his virtue and being in the presence of the best of men. The best of men being his students, for Antiphon had also chastised them for following Socrates in leading such a miserable life.

Then, he asked Antiphon whether he, that is Antiphon, would want to have someone like Socrates, physically fit and mentally free of attachments, as his soldier or would he prefer someone more like himself? Antiphon, of course, could not answer that.

Socrates went further and taught Antiphon that happiness is more than eating and drinking, and living an expensive lifestyle. To be free of such mortal attachments is to be nearer to the supreme deity, and when you can achieve that lofty realm, you will find true and lasting happiness. Socrates would often boast of his disinterest in the “appetites of the body.”

One day, an Athenian by the name of Chaerephon went to Delphi to visit the famed Temple of Apollo. The reason for this visit was to inquire of the Oracle of Delphi, Pythia, who was a conduit for the god Apollo, a simple question. And this was the pertinent question: “Is there any man in Athens who is wiser than Socrates?”

The Oracle, who was consulted for divinations and predictions, replied in the negative: “No, there is none wiser than Socrates.”

When this answer was given to Socrates, rather than praise himself, he chose not to believe it. As was the nature of Socrates, he went about to dispute the Oracle’s answer because he felt that there were many great thinkers, prophets, artists, poets, rhetoricians and many of them could best him in wisdom on any given day.

Socrates went to visit them one by one. But, as he spoke to them, he realized that Pythia was indeed right. The great thinkers were not so great, after all. Their thoughts and answers didn’t have much depth, and could not sustain the dialectical exercise Socrates put them through. They simply hadn’t thought deeply enough, and did not understand beyond a rather plain level.

Some of these discussions are portrayed by Plato, Socrates’ disciple, in the book Dialogues. Socrates would select a topic, of which the renowned men were considered experts, and pose a series of questions, some with irony and others with sarcasm, to make them try to prove their own point.

In the end, Socrates said that he was wiser than they were because they knew nothing while presuming that they did know, which was worse than his own state, because he knew nothing but did not carry the presumption of knowledge. And, in that, he carried an advantage over them.

Why he was killed

During Socrates’ later years, morality went down significantly in Athens. Debauchery and sexual indulgences were commonplace. Socrates spoke up against this, much to the ire of Athenian rulers. He criticized their activities openly.

Socrates compared the man filled with indecent thoughts to a petty thief, and claimed that the thief, at least, enriched himself, while the former destroyed himself and society. Socrates himself claimed that he was akin to a gadfly (an annoying insect) disturbing a lazy horse (the people of Athens).

His constant questioning disturbed the leaders of Athens, who then decided to get rid of him. He was given two choices: to keep his mouth shut or drink poison. He chose the latter, because he felt that death would be a far lesser punishment than giving up his moral principles.

Till the end, he was resolute. In Plato’s Apology, Socrates’ last oration, he said: “It is much more difficult to avoid depravity, for it runs swifter than death.” He said to his accusers that they faced a far greater punishment than he did, and to his supporters, he said that God had always warned him in any case of evil. In this particular judgment, God did not warn him, and for that reason, he went toward death joyfully.