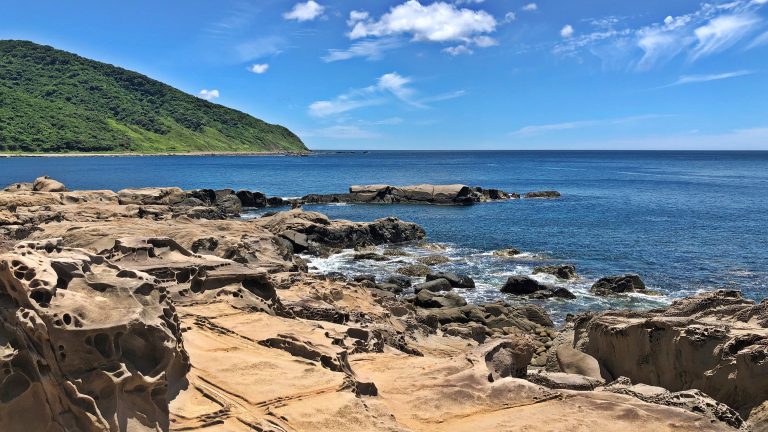 Jialeshuei (佳樂水) is a tourist destination located on the southernmost of Taiwan’s east coast in Pingtung County (屏東縣). It is famous for its unique and interesting rock formations along a 2.5km-long stretch of the coral coastline in Manzhou Township (滿州鄉).

Origin of the name Jialeshuei

This area was formerly known as Chialuoshui (佳落水), which means water falling from a ledge in the Taiwanese dialect. It was named this because there is a waterfall on the top of a 30-meter-high rock cliff facing the Pacific Ocean.

Please watch this video of the beautiful rock formations and waterfalls in Taiwan’s Jialeshuei Scenic Area.

In 1975, late President Chiang Ching-kuo (蔣經國) visited the area and renamed it Jialeshuei (佳樂水), which means “beautiful, happy waters” in Chinese, hoping to bring peace and harmony to the region.

The waterfall is located at the confluence of three small streams above a rocky cliff. During the rainy season, it is magnificent as there is abundant water falling from the cliff and cascading into the ocean. During the dry season, though the waterfall may dry up due to low rainfall, the rocky cliff is still breathtaking and worth visiting.

In light of the fact that it is a beautiful waterfall without a name, late President Chiang Ching-kuo thus named it Shanhai Waterfalls (山海瀑), meaning water falling into the sea from the mountain.

Additionally, there is an expanse of grassland above the waterfall that allows visitors to take in the panoramic views of the Hengchun Peninsula (恆春半島) and the Pacific Ocean.

The eroded coral reef coastal terrains in this area are so special that many distinctive and fantastic rock formations are shaped by the constant erosion by the ocean and strong winds. Many of them are given imaginative name by locals according to their distinctive shapes.

The admission fee is NT$80 (US$2.72) per person, including the round-trip shuttle bus service from the entrance to the waterfall. Along the way, the driver interprets the monikers of some of the more famous rock formations. Children also like to name their own rocks according to their imagination.

Not only is Jialeshui a picturesque tourist destination, but nearby Gangkou Beach (港口海灘) is also a famous surfing destination in southern Taiwan, where the 2017 Pingtung Jialeshuei International Surfing Competition was held.