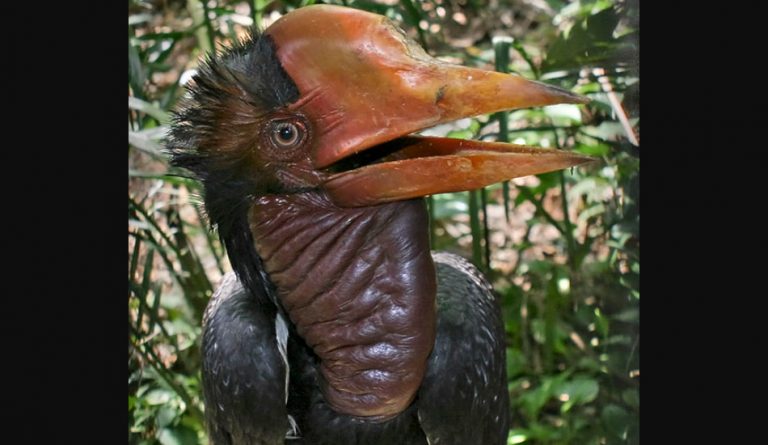 Helmeted Hornbills are at risk of extinction. (Image: GNU FDL via Wikimedia Commons)

Helmeted Hornbills are a bird that is native to Myanmar, Thailand, Borneo, Sumatra, and the Malay Peninsula. The helmet-like structure on the bird’s head, called a “casque,” accounts for about 10 percent of its total weight and is often used by males during head to head combat. Unfortunately, the casque is the source of hornbill ivory, a material that is used to carve decorative items and is often considered as status symbols in countries like China. The rising economic prosperity of China has led to a higher demand for the casques, which is pushing the species closer to extinction.

Helmeted Hornbills are listed in Appendix 1 of the Convention on International Trade in Endangered Species in Wild Flora and Fauna (CITES), meaning that trading the birds is illegal. However, this has not put a stop to such activities as the demand for the casques is so high. In fact, items created from hornbill ivory sometimes sell for up to 5 times the price of elephant ivory products. As such, there is no dearth of shady businesses willing to break the law.

In China, helmeted ivory used to be sent as tributes to Tang and Ming Dynasty emperors. Chinese craftsmen use ivory to create a range of decorative products like bracelets, plume holders, thumb rings, seals, belt buckles, figurines, and so on. According to Lishu Li from the Wildlife Conservation Society, a lot of Chinese men from the middle class see wearing hornbill beaded necklaces and bracelets as trendy.

Last year, the global anti-wildlife trafficking organization TRAFFIC conducted a survey assessing the online trade of the Helmeted Hornbill. Between 2010 and 2017, about 2,878 Helmeted Hornbill casques and related products were seized, with 2,170 of them confiscated between 2012 and 2014 from China and Indonesia. Over a six month period, the organization discovered over 230 posts on Facebook offering Hornbill products.

“It could not be determined if the Helmeted Hornbill casques were sourced from within Thailand or from other range states, although in one instance, a post claimed that the advertised casque piece was from Malaysia… The study also found 94 whole heads of eight other hornbill species, all native to Thailand and prohibited from hunting and trade by Thai legislation made up the rest of the hornbill commodities recorded in the survey,” TRAFFIC said, as reported by the Bangkok Tribune.

The Thai Department of National Parks, Wildlife, and Plant Conservation has developed a 10-year conservation strategy for protecting the Hornbill. Nigel Collar, a senior research fellow at BirdLife International, believes that stronger efforts should be made to ensure that the Helmeted Hornbill does not go extinct.

Helmeted Hornbills tend to be about 95 to 120 cm long, with males weighing about 6.8 lbs and females weighing 5.9 lbs. These birds typically subsist on fruits, especially figs. However, they are also known to eat insects and other little prey if necessary. The Hornbills use their casque as a tool to dig into the rotten wood to find insects. The bird’s call begins with hoots and is followed by maniacal laughter.

These birds usually are monogamous, meaning that once a couple mates, they won’t mate with any other bird. In addition, the females only produce about 1 or 2 chicks a year. The females usually restrict themselves to the hollow of a tree, relying on the male to provide food for her and the children. If the male bird dies, the female and her offspring are likely to starve to death.