US Considers Expelling All CCP Members 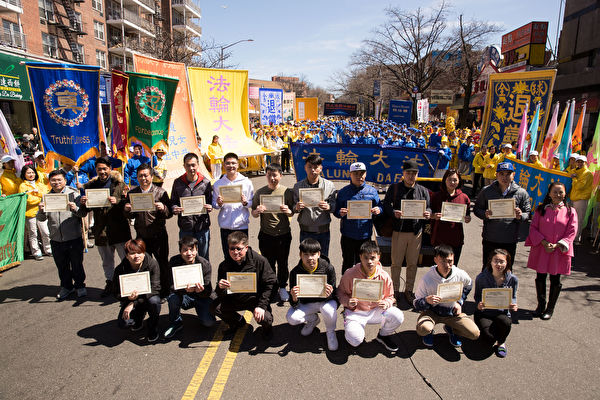 Chinese in New York publicly announced their withdrawal from the CCP, showing their certificates of withdrawal. (Image: Epoch Times)

The New York Times reported on July 15 that the Trump administration is considering a travel ban on all Chinese Communist Party (CCP) members and their families, which would prevent them from entering the United States. When news of the proposal came out, search volume on Google for the term “Quit the CCP” soared.  On July 16, many Chinese citizens went to the Quit the CCP Service Center based in New York to request a certificate to prove that they have cut off ties with the CCP to avoid being implicated as a member.

The U.S. government is in the midst of drafting the presidential order that will make reference to regulations in the Immigration and Nationality Act (INA), which empowers the president to prevent foreign citizens who are deemed “detrimental to the interests of the United States” from traveling to the United States. The same provision in the INA was used in a 2017 travel ban on several predominantly Muslim countries.

This presidential order, if executed, will authorize the U.S. government to revoke the visas of CCP members and their families who already reside in the U.S., leading to their expulsion. There are also measures to restrict members of the People’s Liberation Army and executives of state-owned enterprises from entering the United States.

The New York Times article also stated that, in addition to banning members of the CCP from entering the U.S., officials from the White House, the U.S. Department of State, and the U.S. Department of Homeland Security are also discussing additional plans to ban mainland Chinese from traveling to the United States.

Staff members of the Quit the CCP Service Center in New York reported that as soon as the center was opened on the morning of July 16, Chinese people from around the country called the center asking for a “Certificate of Quitting the CCP.” They unanimously told the center that they saw news of the U.S. proposal to impose a travel ban on CCP members and their families, as well as deporting those already in the country.  In response, many felt that it would be prudent to obtain the certificate to avoid being implicated as a CCP member.