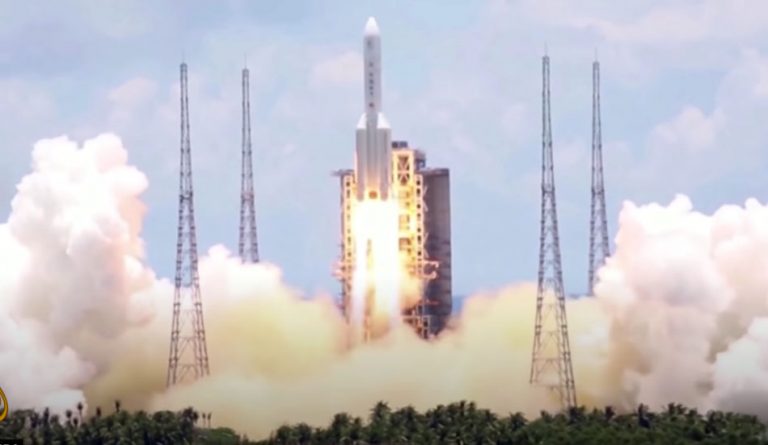 China recently sent its first-ever rover mission to Mars. The mission, named Tianwen-1, consists of an orbiter and a lander/rover duo. China had previously launched an orbiter to Mars in 2011, which unfortunately ended up in failure since the spacecraft crashed back to Earth. The Tianwen-1 mission was launched atop a Long March 5 rocket. This is China’s first completely homegrown Mars mission.

“The scientific objectives of Tianwen-1 include: (1) to map the morphology and geological structure, (2) to investigate the surface soil characteristics and water-ice distribution, (3) to analyze the surface material composition, (4) to measure the ionosphere and the characteristics of the Martian climate and environment at the surface, and (5) to perceive the physical fields (electromagnetic, gravitational) and internal structure of Mars,” mission team members wrote in an article in Nature.

If everything goes as planned, Tianwen-1 should arrive at Mars in February next year. About 2 to 3 months later, the lander/rover combo will touch down in Utopia Planitia, a region located in the northern hemisphere of the planet. This is where NASA’s Viking 2 mission landed in the 1970s. The rover will then spend around 40 Martian days studying the region. Keep in mind that one Martian day is slightly longer than an Earth day by 40 minutes. The orbiter will remain in a polar elliptical orbit. The spacecraft will transmit data from the rover to the mission center back in China.

The rover will be equipped with six devices – terrain camera, multispectral camera, Mars surface composition detector, Mars meteorology monitor, Mars-rover subsurface exploration radars, and Mars magnetic field detector. The rover weighs about 530 pounds, which is twice the mass of China’s lunar rover “Yutu-2.” The instruments aboard the rover will primarily study the planet’s soil composition and its magnetic field.

The statistics of successful Mars missions are disappointing. Half of all such ventures have ended up in failure, which includes China’s 2011 mission. As of now, only the U.S, Russia, and Europe have succeeded in running long-term operations on the red planet.

Tianwen-1 will use a combo of the capsule, parachute, and retro-rockets to slow down and land on the Martian surface. It usually takes a spacecraft about 7 minutes to make the journey from the top of the Martian atmosphere to its surface. This time period is notoriously known as the “7 minutes of terror” since the risk of losing control of the spacecraft is very high. China’s engineers are confident of overcoming the challenge.

Entrepreneur Elon Musk has bigger plans for human beings on Mars, wanting to build an entire colony on the planet. According to Musk, it will take about 1,000 spacecraft and 1 million tons of vitamin C to make the surface of Mars habitable, failing which people who land there will probably “die slowly and painfully.”

Musk envisions his Starship transportation system to Mars to launch SpaceX’s reusable rockets at least 3 times every day, with each craft carrying a payload of 100 tons per flight. With 1,000 flights in a year, this would mean that the transportation fleet would shift about 100,000 tons of cargo from the Earth. Musk aims at settling about 100,000 people in a  Martian colony and turning the settlement into a resupply center for ships from Earth venturing beyond Mars.