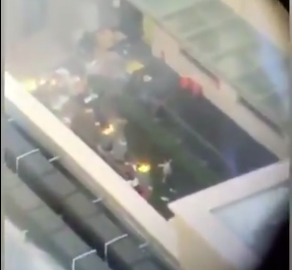 Possibly documents burning in Chinese Consulate in Houston at 22 juky 2020, after US 72hours close noticing of it ( (image: taiwannews.com.tw)

On July 21, the United States gave the Chinese Consulate in Houston 72 hours to close. Beijing retaliated on the 25th by ordering the U.S. to close its consulate in Chengdu. Weighing up the present situation between the two superpowers, Taiwan economist Wu Jialong said that the U.S. still has at least 10 powerful strategies in reserve to bring down the Chinese Communist Party (CCP). Wu Jialong posted these 10 strategies on Facebook on July 24.

Investigate and substantiate the facts that can hold the CCP accountable for the COVID-19 pandemic and thereafter, unite countries with a large number of claims. The CCP would surely not be able to compensate the astronomical joint claim amount, which would cause their national finances to collapse.

3. Remove the firewall set up by the CCP

The U.S. could disable the Great Internet Firewall set up by the CCP in mainland China that censors the Chinese people. This would enable netizens in the mainland to surf the Internet freely and obtain a great deal of real information. Consequently, the CCP’s high-handed rule and social surveillance would not be able to continue.

If the U.S. cuts off the supply of dollars to Hong Kong, this will deplete Hong Kong’s foreign exchange reserves, thus crippling the LERS. If this happened, the Hong Kong dollar would depreciate sharply dragging down the renminbi, causing both currencies to depreciate sharply together. This would cause financial turmoil in Hong Kong and foreign investment would have to withdraw from financial business in Hong Kong, which has been an international financial hub.

5. Exclude banks from the US dollar clearing system

The U.S could exclude Chinese communist and Hong Kong banks from the U.S. dollar clearing and settlement system, making their banks unable to undertake a wide range of essential financial transactions in U.S. dollars and also remittances for their customers. This would ultimately cause a huge crisis in the Chinese communist government’s international trade.

6. Launching in the South China Sea

The CCP’s strategic nuclear submarine base is situated in Yalong Bay, Sanya City, Hainan Island. This type of submarine can, from beneath the waves, launch long-range intercontinental ballistic missiles with small nuclear warheads. These warheads can hit the United States. Therefore, the U.S. has reasons to keep open navigation routes in the South China Sea, not only to maintain the freedom of navigation but more importantly, there is the issue of U.S. national security.

The U.S. can push for an oil embargo on the CCP by using the South China Sea and Malacca Straits, which are major trade routes for crude oil.  Based on statistics in 2016, more than 30 percent of global maritime crude oil trade passes through the South China Sea.

The U.S. could impose sanctions on high-level CCP officials, such as prohibiting the entry of CCP members and their families into the U.S. and deporting those who are already in the country, as well as freezing their assets. These sanctions against the CCP would seriously hurt their overseas interests.

The One-China policy asserts that there is only one sovereign state under China, as distinct from the idea that there are two states, the People’s Republic of China (PRC), consisting of mainland China, and the Republic of China (ROC), now commonly known as Taiwan. The United States could consider restoring diplomatic relations with the ROC.

Wu Jialong emphasized that these 10 major tactics would be devastating and likely put an end to the CCP.  From the speech of U.S. Secretary of State, Michael Pompeo, at the Nixon Library on July 23, 2020, it can be seen that the U.S. is determined to end the CCP’s one-party dictatorship and push China to embark on a market economy and democracy. Trump has a sense of mission to change Communist China, enabling the U.S. to have a fruitful and harmonious relationship with a democratic China.