6 Things to Know About Red Pandas 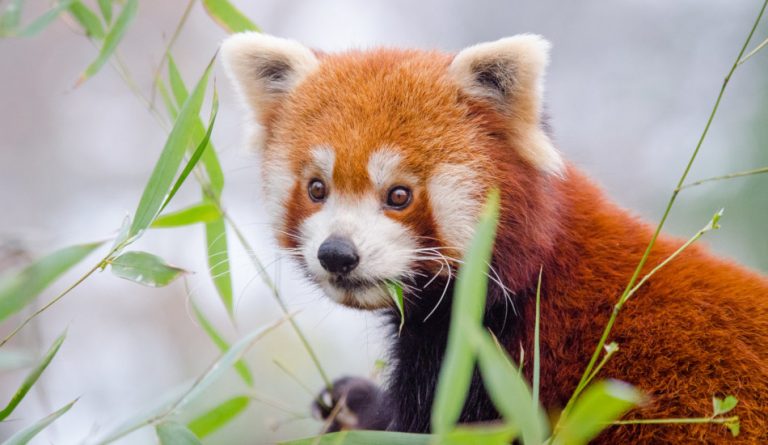 The cute creatures known as red pandas are native to southwestern China and the eastern Himalayas. (Image: flickr / CC0 1.0)

People across the world are familiar with the cute giant panda, but have you heard about the little red panda? Despite having the name “panda,” these two creatures are not related at all. Native to southwestern China and the eastern Himalayas, here are some facts about these animals.

Unlike giant pandas, red pandas have reddish-brown and white fur. Giant pandas are also bigger, while the red ones are only about the size of a domestic cat. An average red panda measures about 20 to 26 inches from its head to its rump, with their tail adding an extra 10 to 20 inches. They usually weigh around 10 to 20 pounds. Giant pandas tend to exclusively eat bamboo, while the diet of red pandas is more varied. A similarity between the two creatures is that they both have a modified wrist bone that acts like a thumb. This helps them to grasp things with greater control.

Red pandas are technically classified as carnivores since they are descended from ancestors with similar eating habits. However, these animals mostly feed upon bamboo or other plants. They also eat insects and other small animals every now and then. As such, red pandas can be thought of as herbivores, though they technically aren’t. Red pandas often eat the young leaves of the bamboo rather than the entire plant. These creatures spend about 13 hours a day eating. During winter, red pandas can lose up to 15 percent of their body weight.

Red pandas have been observed to have quite a sweet tooth. In one study, researchers gave these animals several bowls of plain water, artificially sweetened water, and naturally sweetened water. The team found that the creatures had a huge preference for artificial sweeteners, especially aspartame, neotame, and sucralose. This makes red pandas the only non-primate creatures having the ability to taste aspartame, which was earlier believed to be a trait limited to apes, old world monkeys, and humans. Aspartame is known by its popular trade name NutraSweet.

The animals generally lead solitary lives and only meet up for mating. “Females give birth in the spring and summer, typically to one to four young. Young red pandas remain in their nests for about 90 days, during which time their mother cares for them. (Males take little or no interest in their offspring),” according to National Geographic. Females give birth after a gestation period of only 114 to 145 days, and the newly-born pandas open their eyes after 18 days. They reach maturity in 18 to 20 months. Overall, red pandas live for about 10 years on average. In the wild, life expectancy declines to 8 years. In captivity, they can live for up to 14 years.

There is an Internet browser named after red pandas – Mozilla’s Firefox. Initially, the company wanted to go with the name of “Firebird.” However, after Mozilla found out that the name was already in use by another project, they went with “Firefox,” one of the names attributed to red pandas. Mozilla even adopted two baby red pandas in 2010.

The International Union for Conservation of Nature (IUCN) classifies red pandas as an endangered species. According to estimates, there are only about 10,000 of these creatures left in the wild. The numbers might even be lower given that it is difficult to get an accurate count on them. The good thing is that red pandas live in a large area, with communities often isolated from each other. This safeguards the species from extinction due to poaching or infection.