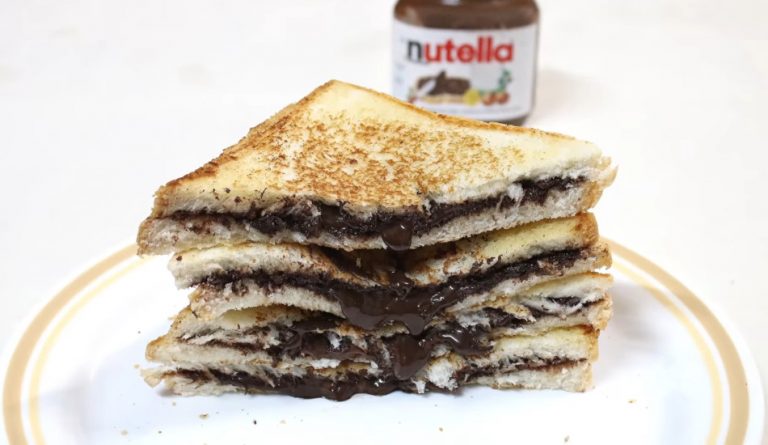 Nutella is a popular chocolaty spread and many people love eating it for breakfast on toast, waffles, or pancakes. (Image: Screenshot / YouTube)

Nutella is one of the most popular spreads in the world. Made by Italian chocolate maker Ferrero, it was first created during World War II to solve the cocoa shortage in the country. Today, many people eat it for breakfast on toast, waffles, and pancakes. However, some are wary about the product due to its potential negative impact on health. As such, a homemade alternative to Nutella that avoids the health issues might just be what you are looking for. Here is one such Nutella recipe.

The basic ingredients for the recipe include 1 cup of hazelnuts, 1 ½ cup of cacao or cocoa powder, and some water. For the sweetener, you can use ¼ cup of maple syrup or 12 dates. First, preheat the oven to 360°F. Take the hazelnuts and place them on a baking pan in a single layer. Roast them for about 15 minutes while stirring at intervals of 5 minutes. Once the nuts have been roasted, take them out of the oven and let them cool for 10 to 15 minutes.

Put the hazelnuts in a food processor and blend well for 10 minutes to get a smooth paste. Next, add in the cocoa powder and the sweetener of your choice. Blend everything for about a minute. Add enough water to get the consistency you desire. Two more minutes of blending and your favorite chocolatey spread should be ready.

The recipe makes enough Nutella to fill an entire jar. The total time for preparing it will be around 30 minutes. If you are using dates as a sweetener, do remember to soak them for 10 to 15 minutes until they are soft.

For store-bought Nutella, sugar remains the biggest component. Six teaspoons (2 tablespoons) of Nutella contains nearly 5 teaspoons of sugar. According to the American Heart Association, women and children should only consume 6 teaspoons of sugar per day. This essentially means that once they use just 2 tablespoons of Nutella for their morning breakfast, women and children are at high risk of excessive sugar consumption for the rest of the day.

“Consuming too much added sugar has been linked to a variety of chronic diseases and conditions, including obesity, diabetes, heart disease, liver disease, cognitive decline, and even some types of cancers, including esophageal cancer… Plus, added sugar may be one of the driving factors behind the surge in childhood obesity,” according to Healthline. This is one of the main reasons why health experts often warn against consuming too much Nutella.

Calorie consumption is another major concern. Two tablespoons of Nutella contains almost 200 calories. Children below the age of 10 only require about 1,000 to 1,600 calories per day, depending on how young they are. Four slices of bread in the morning with 4 tablespoons of Nutella means that the kids would already have consumed 400 calories through Nutella alone. Add in bread and milk, and the breakfast will account for a third or more of their daily calorie intake. As such, the risk of excessive calorie consumption and weight gain among kids who regularly eat Nutella is high.

Now, this doesn’t mean you have to abandon Nutella. You can use our recipe and easily create your own Nutella while carefully limiting the sugar content. You can also use sugar alternatives to make it healthier.