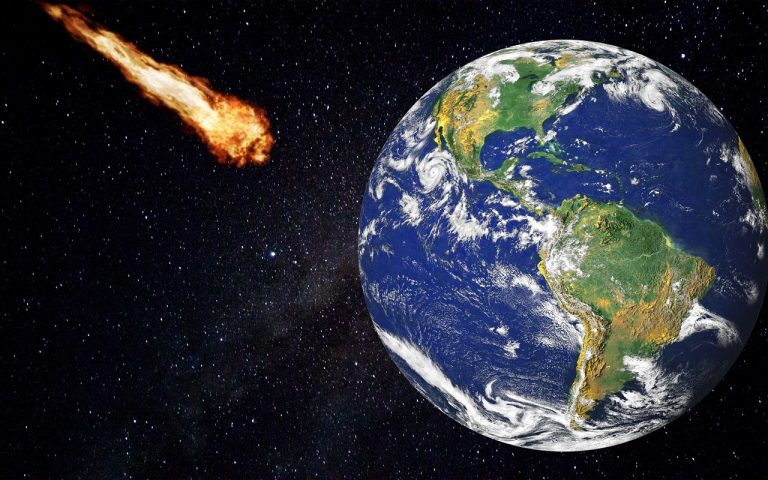 Curtin University researchers have discovered two meteorites in a two-week period on the Nullarbor Plain – one freshly fallen and the other from November 2019. (Image: 9866112 via Pixabay)

Curtin University researchers have discovered two meteorites in a two-week period on the Nullarbor Plain — one freshly fallen and the other from November 2019. Both falls were captured by The Desert Fireball Network (DFN) team, which uses cameras across Australia to observe shooting stars and predict where meteorites will land. The team, which usually searches from March to October, was postponed due to COVID-19, but as restrictions lifted, it observed another meteorite fall just south of the Eyre Highway near Madura.

Astronomer Dr. Hadrien Devillepoix and planetary geologist Dr. Anthony Lagain originally went on a reconnaissance mission to assess the latest fall site near Madura, taking drone imagery of the area. Dr. Devillepoix said that as they were walking back to their car along the old telegraph track near Madura Cave, they spotted what appeared to be a real meteorite on the ground just in front of them, adding:

“I thought Anthony was playing a prank on me, that he planted one of the fake meteorites we were using for the drone training session. But after a closer inspection, it was evident that the fist-sized, 1.1 kilogram rock we just found was indeed the meteorite we were after.”

Dr. Devillepoix explained that although the rock was very close to the predicted fall position, the team was not expecting to find it that quickly in this bushy terrain, saying:

“Most meteorites contain a lot of metallic iron, a lot more than normal Earth rocks. This is why meteorites typically attract a magnet, or make a nearby compass ‘go crazy’. However the meteorite that we found almost entirely fails the compass test – the compass needle barely gets disturbed, which is really intriguing. The next step for us is to now figure out why this is happening and what is making this meteorite so different to the others we know about.”

The scientists backtracked where the meteorites came from

Dr. Devillepoix explained that not only do the fireball cameras allow the team to calculate where the meteorites land, but they also allow it to backtrack where they came from and what orbit they were on before they hit Earth:

“We were able to determine that this meteorite was on an Aten orbit, which means that before it fell to Earth, the meteorite spent most of its time in the innermost Solar System, between Venus and Earth. This type of orbit is unusual because, as most meteorites come from the asteroid belt between Mars and Jupiter, they usually retain an orbital connection to this area of space.”

Two weeks later, Dr. Martin Towner, operations chief of the team, led the six people team to search the site of the November 2019 fall. This fall was northwest of Forrest airport in the middle of the Nullarbor. After just four hours of searching, they found the 300-gram meteorite that the DFN had seen come in on the night of November 18, 2019. This one came from a radically different orbit, pointing to the middle part of the main asteroid belt. The team is now working to uncover what secrets the two rocks hold.

John Curtin Distinguished Professor Phil Bland, the Director of the Space Science and Technology Centre, explained his team is able to learn more about meteorites on Earth by analyzing data collected from strategically placed camera observatories, known as the Desert Fireball Network (DFN):

“The DFN cameras continuously take pictures of the sky every night, and when more than one station detects a fireball, we receive an alert, and then we analyse that data so we can learn more about the fireball. This includes the direction the fireball was travelling with respect to the stars, whether or not the rock survived or burned up when it entered Earth’s atmosphere, where it came from in outer space, and also where it landed. And then we try to go find it.”

Dr. Eleanor Sansom, project manager of the DFN, said that although these rapid successes make finding meteorites sound easy, this is an incredible achievement:

“Teams around the world have been trying to recover meteorites with orbits since the 1950s, but so far only around 40 have been recovered overall, and although the DFN is relatively new in this game, it already accounts for a significant part of this success.”