5 Things to See in Hierapolis, Turkey 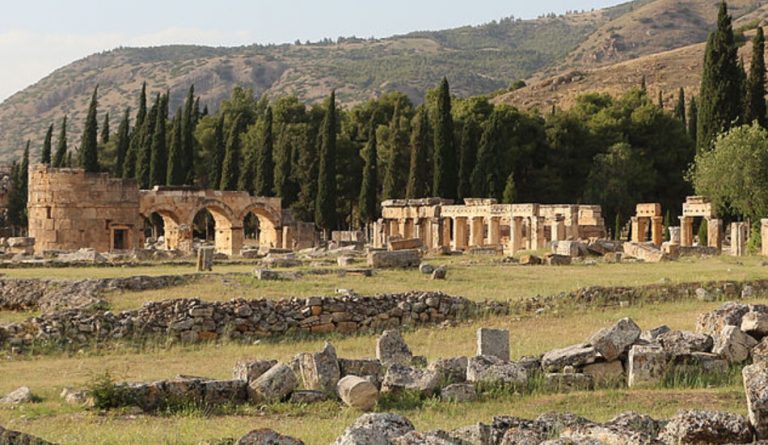 Hierapolis is the name of an ancient Greek city whose ruins are located in modern Pamukkale in Turkey. It was designated a World Heritage Site in 1988. Hierapolis roughly translates as “sacred city” and has a history dating back to the 7th century BCE.

“The name of the city may derive from Hiera, the wife of Telephus (son of Hercules and grandson of Zeus), the mythical founder of Pergamum. Or it may have been called the “sacred city” because of the temples located at the site,” according to Sacred Destinations.

The city of Hierapolis has a main street that used to be 1,500 meters long and was bordered on both sides by a succession of continuous arches. Close to the northern city gates that lead to the main street is the Frontinus Gate built by proconsul Julius Frontinus around 84 CE to 86 CE. It consists of three arches and is one of the earliest grand remnants of Hierapolis. In the late 4th century, the northern gate was fortified with the North Byzantine Gate, the ruins of which still exist today.

The principal god of Hierapolis during the late Hellenistic period was Apollo. A grand temple dedicated to this god existed in those times. At the ruins of the temple, only the foundations exist. Yet the site still attracts a lot of visitors. Interestingly, the temple was constructed over an active planar fracture called the Plutonian. According to the belief in those times, only a priest of the Great Mother could enter the cave while resisting the fumes emanating from the underground fracture. The Temple of Apollo is not the only one constructed over such geological formations. Temples dedicated to this god, including the famous one at Delphi, were usually built over geologically active sites.

The theater at Hierapolis is believed to have been constructed during the time of Roman emperor Hadrian, who lived between 76 CE and 138 CE. This is one of the oldest open theaters whose remains are preserved to some extent. In fact, the full 300-foot-long façade still stands despite centuries having passed since its construction. An earthquake during the 7th century caused significant damage to the theater. At its peak, the auditorium could seat about 15,000 people. The theater has several statues and reliefs of gods and goddesses like Apollo, Diana, and Dionysus.

The necropolis of Hierapolis is one of the best-preserved sites in Turkey. The place has about 1,200 tombs constructed from materials like marble and limestone. The majority of tombs are from the Hellenistic period, with some of them from Roman and early Christian periods. The necropolis is home to simple graves belonging to common people to large family graves of the elite classes. The tombs of poor families are constructed from rocks.

Hierapolis is home to St. Philip Martyrium. Dating from the 5th century CE, the saint is buried in the center of the building. He is said to have been crucified upside-down. However, there is some dispute as to whether the Martyrium actually belongs to Apostle Philip. The design of the Martyrium indicates that it was built by an architect affiliated with a Byzantine emperor. In the late 5th or early 6th century, the Martyrium was burned down, with the fire marks still visible on the columns.