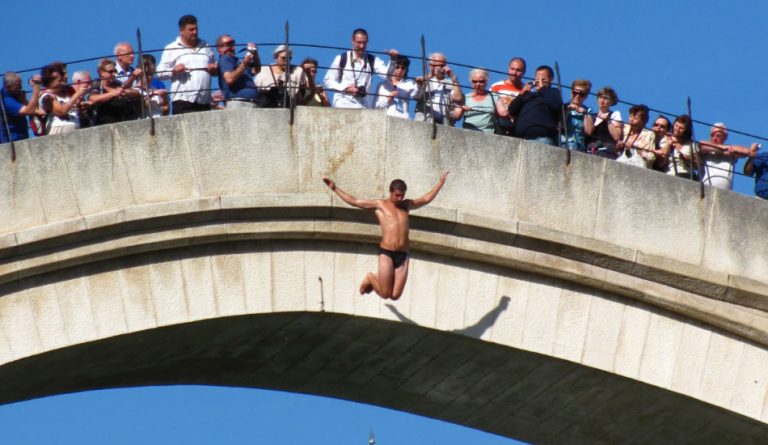 Bridge diving is a tradition at Stari Most. (Image: Michael Bueker via Wikimedia CC BY 3.0)

Like other countries around the world, Bosnia and Herzegovina are currently reeling under the outbreak of COVID-19. More than 13,500 cases of infections and close to 400 deaths have been reported from the country. But despite the fear of COVID-19, the Bosnian town of Mostar recently went festive during its centuries-old traditional celebration of bridge diving.

The bridge diving competition is held at Stari Most (Old Bridge) and is believed to have been in practice since the 15th century. The original bridge used to be made of wood. It eventually was replaced with a new one built from mortar and eggshells in the 16th century. The diving contest is often seen as a traditional rite of passage for local youngsters.

The COVID-19 outbreak was expected to diminish participation this time. However, the number of competitors for the diving contest turned out to be similar to that of the previous years. According to organizer Lorens Listo, this might be due to the fact that locals were craving for some competition. Listo himself has been an ardent participant for several years, winning the top spot in the diving contest 13 times.

Unfortunately, this year’s contest had fewer visitors since authorities strictly limited the number of spectators to just 100. The audience watched from a fenced platform just below the bridge. Usually, the event would have attracted thousands of people, including tourists. Though the diving competition is thought to be hundreds of years old, it only became a formal contest in the 60s.

This year’s diving contest was won by Vedad Basic, who performed a death-defying swan dive to snatch the top spot. He has been diving for about 20 years and became the winner for the first time. Basic was jubilant at the win, noting how winning the competition is the dream of every resident in Mostar.

History of the bridge

The 16th-century reconstruction of the bridge was done when Bosnia was under Ottoman rule. The builder of the bridge, Mimar Hayruddin, was commanded to construct a bridge of unprecedented dimensions that would not collapse, failing which he would be put to death. After construction was complete, Hayruddin even prepared for his funeral thinking that the bridge might fail. However, the bridge turned out to be the world’s widest man-made arch upon completion and did not collapse for over 400 years.

A 17th-century explorer, Evliya Çelebi from Istanbul, called it the highest bridge he had seen in the 16 countries he visited. In 1993, the bridge was destroyed in the Bosnian War during a standoff that lasted around 24 hours. The bridge is reported to have been hit by almost 60 shells prior to its collapse. It was reconstructed in 2004 at a cost of over US$15 million. The design and construction were overseen by a team of experts arranged by UNESCO.

“The Old Bridge area, with its pre-Ottoman, eastern Ottoman, Mediterranean, and western European architectural features, is an outstanding example of a multicultural urban settlement. The reconstructed Old Bridge and Old City of Mostar is a symbol of reconciliation, international co-operation, and of the coexistence of diverse cultural, ethnic, and religious communities,” UNESCO said, as reported by Wild Frontiers Travel. The organization added the bridge in its World Heritage List in 2005. Starting in 2015, Stari Most has become a tour stop for the Red Bull Cliff Diving World Series.