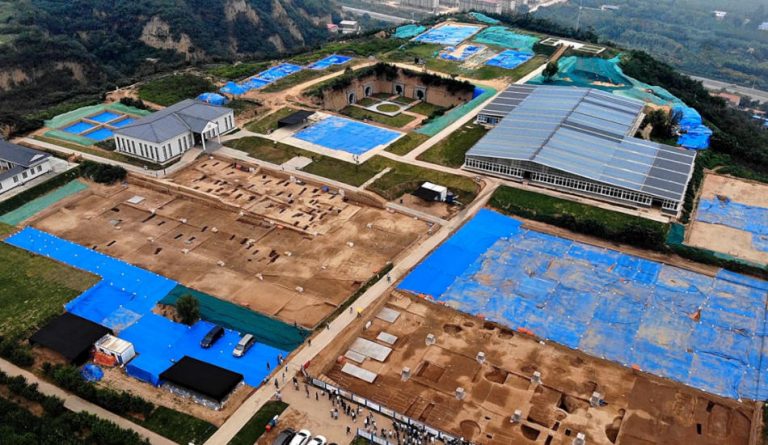 A 5,300-year-old ancient city was recently discovered at the Shuanghuaishu site in China. (Image: Screenshot / YouTube)

A 5,300-year-old ancient city was recently discovered at the Shuanghuaishu site in China. The ruins on the site cover an area in excess of 10 million square feet. Archaeologists believe that the site is one of the biggest tribal clusters of Yangshao culture from the middle and late stages. Yangshao culture refers to the culture that existed along the Yellow River during the Neolithic period. The Shuanghuaishu site is located in an area called Zhongyuan, a place that is considered to be the locus point of early Chinese civilization.

“The large settlement boasted layers of ring trenches and city walls. Researchers also uncovered more than 1,700 tombs that were neatly organized into three blocks, a rudimentary sanitation system, storehouses, and even a road system — all signs that the 5,300-year-old city was carefully designed,” according to All That’s Interesting.

In addition, the research team discovered what looked like the ruins of sacrificial platforms. These platforms were erected between the city’s residential areas. A set of clay pots were found, placed mysteriously in the shape of the Big Dipper, signaling that the residents already had knowledge of astronomy.

A boar tusk carving of a silkworm was also found, which is said to have become a national treasure. The carving is 2.5 inches long and 0.4 inches wide. This is believed to be the oldest carved depiction of silkworms in China, thus indicating that people in the region may have been breeding them and producing silk more than 5,000 years ago.

Despite being one of the earliest archaeological ruins discovered, the Shuanghuaishu site displays a settlement that is of a high standard, equal to the characteristics of a metropolis. Some experts call the site “the embryo of early Chinese civilization.” There are signs showing that the people who lived in the region moved away from a primitive form of equality to a stage where divisions of wealth and class started to be stressed. This probably is an indication of society shifting toward an early national civilization.

The terracotta army at Xi’an is a must-visit historical site in China. Covering an area of more than 236,000 square feet, it is home to about 8,000 life-size soldiers and horses. Over 10,000 bronze weapons have also been dug out from three pits. The site is basically the biggest underground military museum in the world and easily a candidate for the title of one of the seven wonders of the world. The tomb was constructed over 2,200 years ago by about 700,000 laborers. The tomb belongs to the legendary Emperor Qin Shi Huang. All terracotta soldiers face east, the direction of Emperor Qin’s enemies in those times.

The Mogao Caves in Dunhuang are famous for being the home of about 500 Buddhist temples. The first caves were dug out way back in the 4th century A.D. The caves are graced by Buddhist art spanning about 1,000 years. Almost all major types of art can be found in the caves, including wall paintings, woodblock printings, stucco sculptures, embroideries, silk paintings, and so on. Extensive murals cover the caves, running over a surface 40 times greater than that of the Sistine Chapel. When art historian Langdon Warner wanted to describe the Dunhuang caves, he could only say that: “There is nothing to do but gasp.”