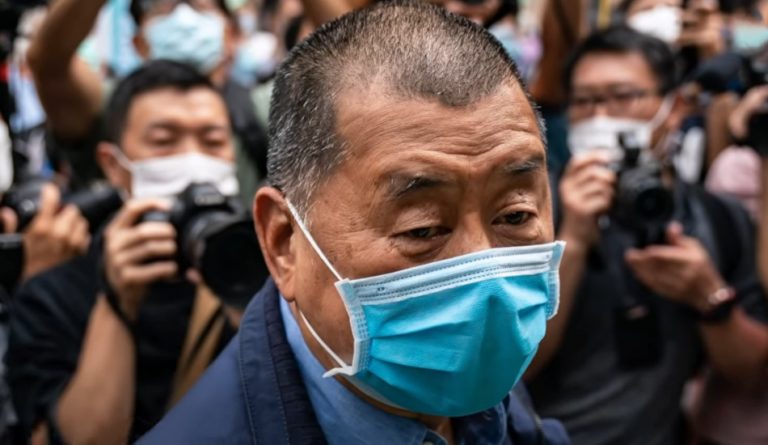 On August 10, the Hong Kong police arrested seven people, including Jimmy Lai, founder of Apple Daily, a Hong Kong tabloid-style newspaper. It is part of Next Digital, the parent company. Along with Jimmy Lai, his two sons and four senior officials of Next Digital were also arrested under the new Hong Kong National Security Law that was imposed by Beijing. Following the arrests, various American politicians condemned Beijing and the Hong Kong government.

Police forcefully entered the headquarters of Next Digital to search for documents. They spent four hours filling up 30 exhibit boxes and the entire search operation took nine hours to complete. The tea restaurant “Café Seasons” opened by Lai’s second son was also raided by police, who took away computers and other materials as evidence.

Apple Daily issued a statement on the evening of August 10 to express extreme anger over the incident, condemning and denouncing the actions of the Hong Kong police as a blatant violation and abuse of power in breaching press freedom through intimidation and creating an atmosphere of violent repression. It added that, in the face of these illegal and unreasonable tactics, the staff of Apple Daily will certainly continue to stay fearless, fight on, and speak the truth.

The statement continues: “The regime believes that we will be silenced by intimidation and harassment and that they can push an international city back to the level of a third world, totalitarian society. Hong Kong’s press freedom is now hanging by a thread, but our staff will remain fully committed to our duty to defend the freedom of the press.”

The arrest of Jimmy Lai and the blatant raid of the headquarters of Apple Daily by the Hong Kong police shocked all of Hong Kong society. Outraged celebrities and netizens from all walks of life are furious with the Hong Kong government for suppressing press freedom and especially emphasized their continued support for Apple Daily.

Joshua Wong, leader and founder of the now-disbanded pro-democracy group Demosisto, posted on Facebook that the authorities’ move is related to the recent sanctions imposed by the United States on Chinese Communist Party (CCP) members and Hong Kong government officials. He mentioned that it is obvious that the CCP is mindful of the effect of making an example out of someone in order to threaten others.

Wong said that he is still being tracked continuously and that his own arrest by Hong Kong police under the new National Security Law may be just a matter of time. He called upon the people of Hong Kong to support Jimmy Lai and Next Digital with practical actions. “Even if Apple Daily prints empty sheets of paper tomorrow, we will still buy their newspaper because they report the truth and this is to help Apple Daily sell out.”

Chan Kin-man, one of the founders of the 2014 “Occupy Central” umbrella movement that strove for universal suffrage in Hong Kong, re-posted Joshua Wong’s post on Facebook: “Apple Daily is a sign of freedom. Without Apple Daily, Hong Kong would have no freedom.”

On the very next day, August 11, the people of Hong Kong rallied to support Apple Daily. Some are quoted as saying:

“Even if the paper is printed blank, I will still buy.”

“I buy every Apple Daily newspaper I see on the street, the more it has been suppressed, the more I want to buy it.”

“No one when born in Hong Kong, is an island and don’t ask for whom the bell tolls. It’s for you and me.”

Strong US support for freedom of the press in HK

United States Vice President Mike Pence and members of both parties in the U.S. condemned the arrest of Jimmy Lai by the Hong Kong government.

Mike Pence tweeted that the arrest of Jimmy Lai and others by the Hong Kong police has seriously offended the freedom-loving people of the world.

The arrest of @JimmyLaiApple in Hong Kong is deeply offensive & an affront to freedom loving people around the world. When I met w/ Jimmy Lai @WhiteHouse, I was inspired by his stand for democracy & the rights & autonomy that were promised to the people of Hong Kong by Beijing. pic.twitter.com/ZwioCrvNb7

Pence added a reply to the tweet that said: “The United States will continue to stand with Jimmy Lai and all the freedom-loving people of Hong Kong.” He also attached the hashtag of “#FreeJimmyLai.”

A number of U.S Republican and Democratic congressmen also responded to the arrest of Jimmy Lai and the others. They tweeted the same sentiments and unanimously condemned the CCP and the Hong Kong government for interfering with press freedom.

The lawmakers also emphasized that this is a violent attack by the Chinese Communist Party on the freedom of the press. They are saddened that Hong Kong has quickly fallen into authoritarian rule and they will support the people of Hong Kong.

The latest news is that owing to international pressure, Jimmy Lai was released on bail after being held for twenty-four hours.