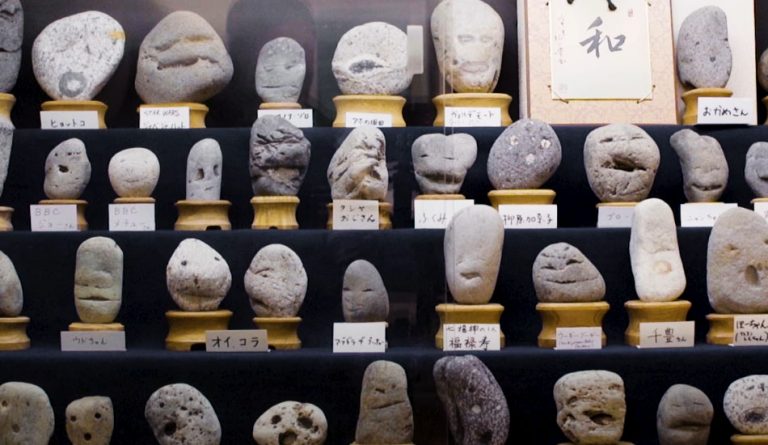 Located about two hours outside of Tokyo is a curious museum that displays a large variety of rocks with human faces. (Image: Screenshot / YouTube)

Ever seen a rock that resembles a human face? If not, you should check out the Chichibu Chinsekikan, or “Hall of Curious Rocks” museum next time you visit Japan. The place is filled with numerous rocks that seem to resemble famous personalities or express human emotions.

The museum was founded by Shozo Hayama, who was obsessed with collecting rocks. “The museum’s founder, who passed away in 2010, collected rocks for over fifty years. Initially, he was drawn to rare rocks, but that evolved into collecting, well, strange rocks — especially unaltered rocks that naturally resemble celebrities, religious figures, movie characters, and more,” according to Kotaku. Shozo’s wife Yoshiko operates the museum at present.

There are over 1,700 rocks on display in the museum, with 900 of them being “face rocks.” Popular figures represented in the face rocks include Jesus Christ, Nemo, Elvis Presley, Boris Yeltsin, Donkey Kong, Mickey Mouse, and so on. Some of the rocks don’t have names. So Yoshiko invites visitors every now and then to name the rocks. The museum is hugely popular due to its quirky exhibit and has been featured in numerous Japanese TV shows.

The face rocks got their unique features after being exposed to erosion, mineral imperfections, cracking, weathering, and other factors over a long period of time. As to why Shozo observed human faces in the rocks, it can be attributed to the possibility that he had a certain amount of pareidolia, which is the tendency to perceive a form in an ambiguous visual pattern. What this basically means is that Shozo likely looked at rocks and identified faces when normal people wouldn’t have unless the face was pointed out to them.

Face pareidolia works in a specific way. First, the eyes send a message to the brain as to what it is seeing. In the brain, this message is sent to the occipital lobe that deals with vision where it appears as jumbled patterns of edges, darkness, and light.

The brain then sorts these patterns into parts of a human face and sends this information to the temporal lobes. It is here that all the information is put together and the brain then registers that what you are seeing is a face. The region in the temporal lobe where this all happens is called the fusiform face area (FAA), which tends to be active in people with pareidolia even when they look at fuzzy pictures.

At Chinsekikan, Yoshiko routinely searches for face-like rocks. According to her, such rocks can only be discovered by walking step-by-step rather than glancing at them quickly. To classify a rock as having a face, Yoshiko notes that it needs reasonably aligned eyes and a mouth. The presence of a nose is a bonus and will go a long way in making the face-like appearance convincing. The Chinsekikan museum is located 10 minutes from Kagemori Station, about two hours outside of Tokyo.

One of the best-known rock museums is the World Museum in Liverpool, England. A wide range of rocks from across the world is displayed in the museum. In total, almost 11,500 rock specimens are exhibited, ranging from igneous, sedimentary, and metamorphic rocks. In addition, numerous meteorites, impactites, and tektites are also on display.

The Crater Rock Museum in Oregon in the United States is a 12,000-square-foot establishment that features rocks, minerals, and gems. Often considered to be the best rock museum in America, it is home to a sizable collection of fossils, indigenous American artifacts, and petrified wood. Interactive experiences provide information about various rocks.