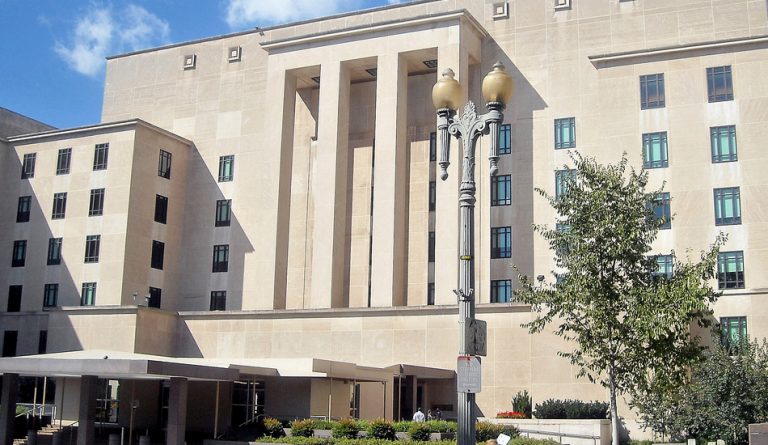 The U.S. State Department announced Washington would be suspending or eliminating three treaties with Hong Kong. (Image: via U.S. Department of State)

The U.S. State Department said in a statement issued on August 19 that the agreements that were ended covered “the surrender of fugitive offenders, the transfer of sentenced persons, and reciprocal tax exemptions on income derived from the international operation of ships.”

“These steps underscore our deep concern regarding Beijing’s decision to impose the National Security Law, which has crushed the freedoms of the people of Hong Kong,” State Department Spokeswoman Morgan Ortagus said.

Ortagus noted the “drastic steps to erode the high degree of autonomy that Beijing itself promised to the United Kingdom and the people of Hong Kong for 50 years under the UN-registered Sino-British Joint Declaration.”

That declaration, which promised “one country, two systems,” has been undermined by the National Security Law passed by Beijing that has drastically curbed freedoms and political oppositions, especially the thriving pro-democracy movement.

The United States, Britain, and other Western countries have condemned China for imposing the law, which criminalizes acts it says threaten China’s national security, for reneging on its agreement to grant Hong Kong 50 years of autonomy when it was returned to Chinese rule from Britain in 1997 while activists say Beijing will use the law to target its critics in the city.

The ending of the agreements follows President Trump’s order last month to end Hong Kong’s special status under U.S. law to punish China for what he called “oppressive actions” against the people of Hong Kong.

The U.S. administration has already taken several moves to punish China over its treatment of Hong Kong and protesters there including sanctioning 11 people, including Carrie Lam, the political leader of Hong Kong, earlier this month for restricting the freedom of expression or assembly of people in Hong Kong under an act that was signed into being following the imposition of the National Security Law.