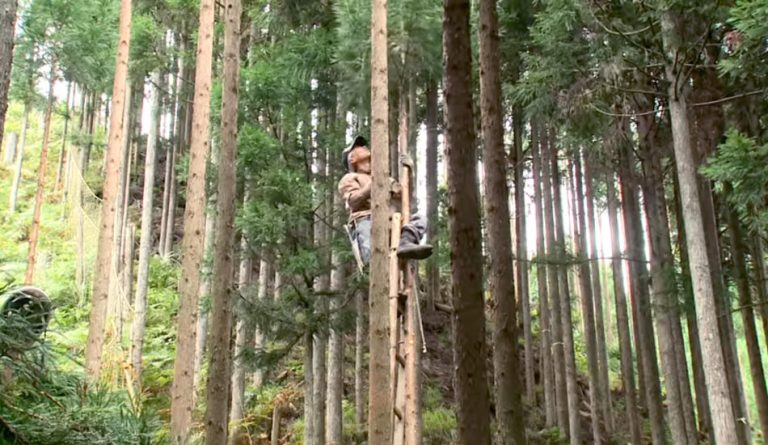 A technique called daisugi enables the Japanese to raise cedar trees that are perfectly straight and that do not have any knots. (Image: Screenshot / YouTube)

Most of you have heard about the Japanese art of “bonsai,” a technique that allows people to raise miniature versions of trees. However, have you heard of a method called “daisugi”? Unlike bonsai, daisugi enables the Japanese to raise cedar trees that are perfectly straight and that do not have any knots.

“In daisugi, the cedar tree is pruned heavily in a special way that it forms a giant bonsai that produces shoots of straight cedar branches growing upward. For common people, the result will appear like we are growing cedar trees on smaller cedar trees. This technique will allow the branches to be harvested every 20 years, shorter than normal sugi plants. What makes it incredible, one base daisugi can grow up to one hundred shoots at a time, which means we can get more Kitayama Maruta (cedar tree logs) from just one daisugi,” according to Earth Buddies.

The technique is said to date back to the 15th century and was created by people from the Kitayama region as a way to solve the problem of a seedling shortage. The terrain of the region was uneven, with very little flat land. This made planting and raising trees a difficult affair. Daisugi proved to be an excellent solution as it allowed people to reduce the number of plantations, speed up the harvest cycle, and produce high-quality, denser wood. The lumber was even used to build homes of the samurai.

Kitayama cedar logs were used as the main pillars in Japanese alcoves called Tokonoma. These alcoves were usually used to exhibit artistic items like scrolls or ikebana. Kyoto’s tea houses feature such logs prominently. Kitayama Maruta is the only type of wood to have won the appreciation and met the standards of tea master Sen-no-rikyu who perfected the Japanese “Way of Tea.” Though the Kitayama Maruta produced by daisugi tend to be on the smaller side when compared to normal sugi trees, the lumber is typically 140 percent more flexible while being denser and stronger.

Daisugi is also good for the environment. We use wood in many of our products like furniture, sculptures, cooking utensils, chopsticks, ornaments, and so on. For this, numerous trees are cut each year. However, by using daisugi, we can get lumber without ever having to cut the trees. Imagine the millions of trees that won’t have to be cut down every year to serve our needs and the positive consequences of such an action.

In addition to daisugi, Japan is also famous for gifting the world with the “Miyawaki Method” of growing forests. The technique was invented by botanist Akira Miyawaki. Using the method, we can grow trees within a very small space, with the minimum area required being only 20 square feet. Not only do the trees grow up to 10 times faster, the entire forest can become maintenance-free in as little as 3 years.

The method involves planting several species of plants in a multi-layered manner. When compared to conventional plantation techniques, using the Miyawaki Method lets you plant at least 30 times more trees. There can potentially be 300 percent more plant species in an area at the minimum. Forests developed using the Miyawaki Method provide 3,000 percent better dust and noise isolation. The absorption of carbon dioxide is at least 30 times that of a conventional forest.