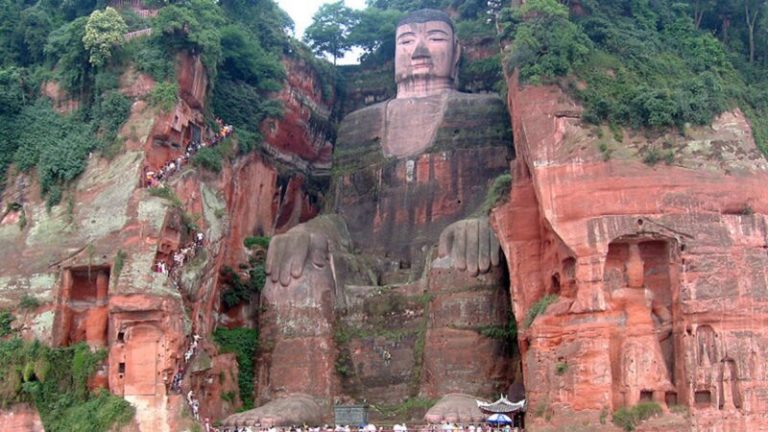 The Leshan Giant Buddha in the southern part of Sichuan Province in China is the largest and tallest stone Buddha statue in the world. (Image: Ariel Steiner via Wikimedia Commons)

The world’s largest and tallest stone Buddha statue, the Leshan Giant Buddha, is located at Lingyun Mountain’s Qifeng Peak, which is located at the confluence of three rivers — the Min River, Qingyi River, and Dadu River — in the southern part of Sichuan Province in China. The statue depicting Maitreya Buddha in a sitting posture is 233 feet tall. It was built between A.D. 713 and A.D. 803 during the middle of the Tang Dynasty.

For hundreds of years, people from all walks of life, as well as today’s tourists, have been visiting the site to see the Buddha statue, which has been included by UNESCO on the list of World Heritage sites since 1996. It has become a cultural and natural heritage site in the world.

In history, the eyes of the Leshan Giant Buddha have closed and shed tears several times.

According to related records, the Leshan Giant Buddha closed its eyes once during the Great Famine in China between 1959 and 1961. During that time, countless people starved to death in Sichuan. The locals were very impoverished and when their loved ones died, their bodies were rolled up in straw mats and placed in the river. The Giant Buddha is located in the lower reaches of the river and every day, dead bodies would float down the river past the Giant Buddha. The Giant Buddha, one night during this time, suddenly closed his eyes. The local people witnessed this phenomenon and thought that the Buddha could not bear to see such misery and horror.

It was believed that when the eyes of the Leshan Giant Buddha closed, it was an ominous sign. This phenomenon alarmed the Chinese Communist Party (CCP) authorities. So they ordered “reconstruction” work to be carried out on the Buddha’s eyes. Back then, photos of the Buddha with closed eyes were still preserved in the Leshan Exhibition Hall.

In 1966, Mao Zedong’s 10-year Cultural Revolution movement inflicted catastrophe, wholesale destruction, and tragic disaster on traditional Chinese culture. During this appalling time of carnage, the eyes of the Buddha closed and wept silently.

In July 1976, after the Tangshan 7.8 magnitude earthquake, the entire city was leveled causing hundreds of thousands of deaths. After the earthquake, local people in Sichuan found that the eyes of the Leshan Giant Buddha were closed again. This time the Buddha looked angry and wept.

The last time the Giant Buddha shed tears was on June 7, 1994. Based on eyewitness accounts, tourists on a cruise ship witnessed the Buddha weeping. Soon after the cruise ship pulled near the shore, the Buddha was then seen smiling happily, although the tears were still on the face of the Buddha. This time the tourists shed tears of happiness. A Taoist teacher and his disciple were also on the cruise ship.

The disciple asked his Teacher: “Why did the Leshan Giant Buddha shed tears?”

The Taoist replied: “The world does not know how to respect the Buddha and the Buddha is worried for the world.”