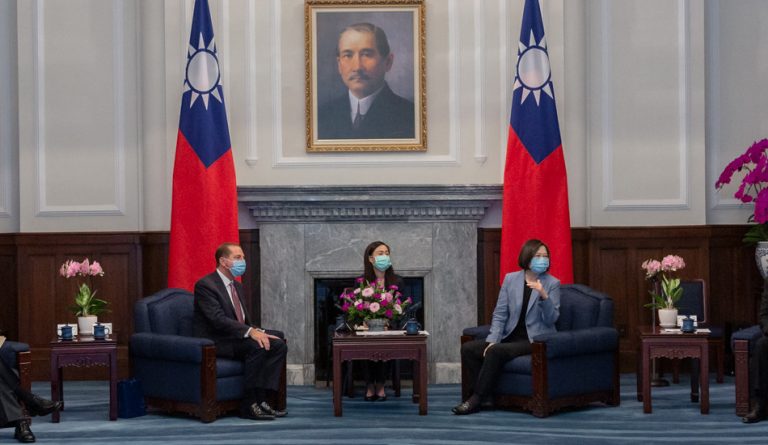 Alex Azar (left) meets with President Tsai Ing-Wen (right) during his visit to Taiwan. (Image: 總統府 via flickr CC BY 2.0 )

Alex M. Azar, the U.S. Secretary of Health and Human Services (HHS), recently visited Taiwan to strengthen the department’s ties with the island’s Ministry of Health and Welfare. During the trip, the American Institute in Taiwan (AIT) and the Taipei Economic and Cultural Representative Office (TECRO) signed a memorandum of understanding that widens the scope of U.S.-Taiwan health collaboration between the two governmental organizations. Of late, the two countries have also been engaged in talks to expand their cooperation on trade and defense.

“Under the Global Cooperation and Training Framework (GCTF) established in 2015 through AIT and TECRO, the United States and Taiwan have trained over 200 health professionals from the Indo-Pacific region to respond to multiple pandemic outbreak challenges facing the world, including the ongoing COVID-19 pandemic, Middle East Respiratory Syndrome (MERS), dengue fever, Zika, enteroviruses, and tuberculosis… The Memorandum of Understanding signed on August 10, 2020, between AIT and TECRO is expected to facilitate further collaboration to address public health concerns around the world,” a joint statement from the two state departments said.

Azar’s trip is the first visit to Taiwan by a high-level American official since Washington broke off diplomatic ties with Taipei in 1979 in order to pursue a relationship with mainland China, a decision which has proven to have been a major mistake. China is increasingly becoming antagonistic to American interests after the U.S. has spent time and money over the last 40 years trying to build ties with the country. The Trump administration’s rising collaboration with Taiwan is a clear indication that the U.S. intends to support nations that promote democracy and human rights rather than those that crush such ideals.

American officials pointed out that the Taiwan visit was an opportunity to learn about strategies to control COVID-19, since the island nation has been very successful in keeping the pandemic in check. Even though Taiwan is close to China and everyone was expecting the viral outbreak to be severe, the country has surprisingly avoided such a situation. There have only been around 500 COVID-19 cases in Taiwan and just 7 deaths. One official stated that the trip is a recognition of Taiwan’s success in combating COVID-19 and is a testament to how open, democratic countries are best equipped to deal with such huge threats.

China lashed out at the U.S. visit to Taiwan, terming it as a threat to “peace and stability.” The country’s defense minister warned the U.S. not to engage in any “dangerous moves.” China has always seen Taiwan as a wayward province that should be brought under its control. However, America’s growing support to Taiwan has irked Chinese officials who realize that this would make things complicated should Beijing decide to use military force to annex the island.

Taiwan will soon be receiving 66 U.S-made F-16 fighter jets that will significantly bolster the island nation’s military capability against China. This is the biggest arms sale to Taiwan in many years. China had previously tried to block the sale but was unsuccessful. The aircraft sale was sanctioned by the Trump administration a year back. U.S. Democratic Representative Eliot Engel of New York noted that the F-16 sale sends a strong message of American commitment to maintaining security in the Indo-Pacific.

Meanwhile, Taiwanese President Tsai Ing-wen has pitched the idea of a Free Trade Agreement between the two nations. She remarked that such a deal would strengthen the existing trade relationship and would be mutually beneficial. America is the second-biggest trade partner of Taiwan, with China at the top spot. The island nation’s trade with the U.S. accounted for 13 percent of the global total last year.