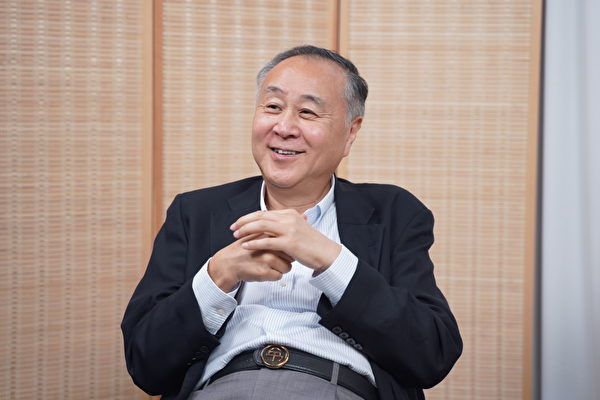 This is part one of a two-part series about a recent presentation given by Hong Kong industrialist Elmer Yuen in San Francisco.

Recently, Hong Kong industrialist Elmer Yuen, or Daddy Yuen, as most people are used to calling him, flew from Washington to San Francisco where he was invited to deliver a presentation on August 16. He said that 50 families of the Chinese Communist Party (CCP) have 10 trillions of U.S. dollars in assets and the CCP has also stolen the official name of the country, “The People’s Republic of China,” to their advantage. The CCP is not “China” and it does not represent the “People” nor is it a “Republic.” He also said that he is not anti-communist, but only wants to eliminate the CCP.

Just as Mr. Yuen started to deliver his speech in San Francisco, he was already choked up with emotion. He related that way back in the 1980s, he and many people were deceived by the CCP, thinking that the reform and opening up of China to the world were for the benefit of the people. Instead, the people were reduced to cheap labor by the CCP. This time, the CCP has imposed a National Security Law on Hong Kong and this has made people all over the world see the true colors of the CCP. He further said that in traditional culture, the Chinese have always been creditworthy and know how to repay gratitude. Whenever mainland people need help, Hong Kong people have always ranked first to render their help.

During the Eastern China flood in 1991, in just 10 days, Hong Kong raised US$60.4 million in aid for flood relief; in 1998, there was a devastating flood in Southern China and at that time, Hong Kong donated US$87.73 million to the mainland; for the 2008 Great Wenchuan earthquake, the Hong Kong government and people from all walks of life contributed a total of more than HK$23 billion (US$2.97 billion), accounting for half of the global donations in terms of cash. It can be said that whenever China is in crisis, the Hong Kong people can be seen everywhere, whether it is in rescues or reconstruction of the disaster area.

During the reform and opening up of China to foreign investment, a large number of Hong Kong businessmen not only invested in China, but they even personally went to the mainland to teach the people how to run a business or set up factories. Some commentators once said that without Hong Kong, there would not be any miracle of China’s economic development. Since China’s reform and opening up in 1978, China’s first foreign-funded enterprise, first joint venture, first five-star hotel, first highway, and so on, have all been completed with the help of Hong Kong capital. Hong Kong not only sends funds and talent to China, but it also brings a successful management culture and development model to China. “Hong Kong people’s direct investment in China has exceeded US$1 trillion, which is more than half of the total foreign direct investment.” In addition, as an international financial center, “Hong Kong is also the world’s largest offshore Renminbi (RMB) business center and more than three-quarters of the global RMB settlement business is completed in Hong Kong.”

Mr. Yuen said that it is not a Chinese tradition at all to seek revenge and the CCP has stolen the official name of the country: “People’s Republic of China.” The CCP pursues Marxism-Leninism and Soviet Russian culture, which does not conform to the requirement of being Chinese. The CCP does not care about the people who have been exploited. The CCP’s dignitaries and senior officials used the misappropriated funds to invest overseas. “Where does the money come from? The Chinese people provide cheap labor and export their products to the United States in exchange for U.S. dollars and the corrupt CCP officials put them in their own pockets.”

At this juncture, Mr. Yuen was in tears. He said that the CCP disregards human life and treats the people like animals; the CCP’s powerful officials remit the money overseas; Goldman Sachs, Wall Street, and others are the ones that helped the powerful officials to remit the money overseas and also help them to invest and earn high commissions from it. The second and third generation CCP leaders came to the United States to study and receive the best education and then they joined Wall Street after graduation.

What assets does the Chinese Communist Party have? The deposits of 100 dignitaries in Swiss banks has reached US$10 trillion. The amount is staggering. Mr. Yuen pointed out that the dignitaries have already emptied China’s foreign exchange. “Of the US$10 trillion, Jiang Zemin’s family has US$1 trillion. After the money is siphoned out of the country, it is invested in various places and beautiful cities around the world, including Hong Kong. Their monopoly of investments, properties, and funds in Hong Kong forced Li Ka-shing to move his business to the United Kingdom.”

Mr. Yuen pointed out that 50 families of the CCP own US$10 trillion. They monopolize different industries in different regions and control 90 million Party members to help them to collect the money. Of the 90 million Party members in China, the bottom tier is the exploited Chinese people.”The Republic means that people can be masters. In China, did people ever vote?  When have you seen the National Budget?”

The pandemic creates an opportunity

Mr. Yuen also pointed out that everyone in China has been persecuted by the CCP. “From my grandfather’s generation to the present, there is no exception; now the Wuhan pneumonia virus is spreading around the world and this situation is created by the CCP, so it is an opportunity to eliminate the CCP.”

Mr. Yuen said that he has lived in the United States for 20 years and knows this country very well. At present, the CCP virus has claimed the lives of over 170,000 Americans. The United States will make the CCP pay their debts with blood. It is not a question of money. The U.S. government has allocated several trillion U.S. dollars to fight the epidemic which has caused a sharp increase in the number of unemployed people in the United States. The CCP cannot compensate for these losses. From the bottom to the top, from the people to the congressmen up to the president, the U.S. will not let the CCP off the hook. He also said that the U.S. Navy is holding parallel exercises in the South China Sea, forcing the CCP to disintegrate step by step.

He used the term “perfect storm” to describe the current situation. The floods have caused the loss of the harvest in southern China. The authorities have no choice but to buy soybeans and other agricultural products from the United States and may buy more in the future. Currently, China is facing “internal and external” problems.

Mr. Yuen also stated that when Hong Kong fell, the basic responsibility of a man is to defend his homeland. Compared to Hong Kong before 1997, the CCP has made Hong Kong into a mess, “the rule of law, freedom, democracy, and prosperity are all gone.” He also revealed that the CCP wanted to negotiate with the United States on Huawei, Alibaba, TikTok, and so on, but President Trump rejected them. In addition, there are currently about 300,000 to 500,000 Chinese Communist Party members in the United States and Trump intends to freeze their property and then deport them and their families.