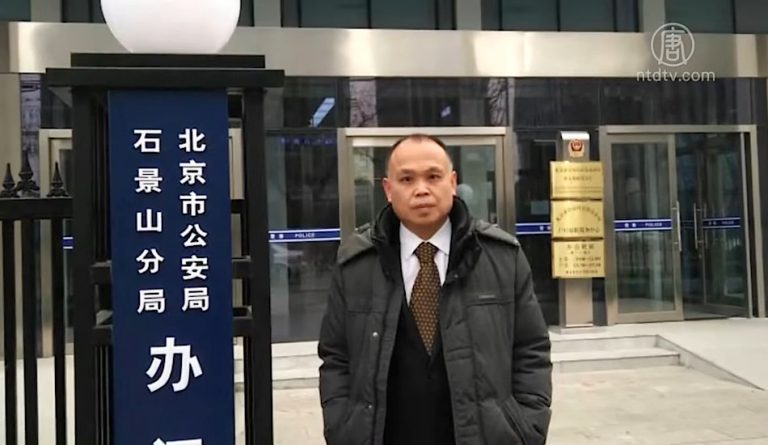 Yu Wensheng is a human rights lawyer from China who was sentenced to four years in prison on charges of 'incitement to subvert state power.' (Image: Screenshot / YouTube)

Yu Wensheng is a human rights lawyer from China who was sentenced to four years in prison in June this year after the court found him guilty on charges of “incitement to subvert state power.” Now, his wife, Xu Yan, is worried that her husband might end up becoming disabled from the torture he will be subjected to while in prison.

Yu had already been held in detention for three years before he was sent to trial. During this time, Chinese authorities never allowed his family members to visit him. Xu Yan’s 60 attempts to meet government officials turned out to be in vain. She filed around 300 requests at various government departments regarding the detention of her husband, but did not receive a single reply. Chinese authorities also kept tabs on her and began harassing her when she started advocating for her husband. Xu has been banned from traveling. She is now concerned about her husband’s health. Human rights lawyer Wang Yu admits that Yu Wensheng will be at a higher risk of torture throughout his detention.

Yu Wensheng was indicted in February last year. Even though his lawyers made several attempts to contact him, their requests were consistently denied. Yu was detained under “residential surveillance at a designated location” (RSDL), a type of detention that is often used in cases that involve state security. RSDL allows authorities to block the visiting rights of the detained person’s family or lawyers. This has often been used against human rights activists in China. According to rights groups, people detained under RSDL are often subjected to torture.

Yu was arrested in January 2018. Four days prior to the arrest, he received a letter from the Beijing Municipal Judicial Administration Bureau informing him that his license as a lawyer was suspended since he had not been employed by a registered law firm for more than 6 months. Just days before the revocation of his license, Yu’s application for starting a new firm was rejected because he had spoken out against the Chinese Communist Party (CCP) and had attacked the country’s “socialist rule of law.” Recently, Yu was finally given access to a lawyer. According to the lawyer, Yu’s right hand was trembling so greatly that he couldn’t even write with that hand. Yu also has trouble chewing food on the left side of his mouth.

Ever since Xi Jinping took charge, the human rights situation in China has become much worse, according to academic lawyer Teng Biao. He points out that Xi has detained or killed at least 300 lawyers since 2012. “I was kidnapped, disappeared, and tortured in China. Xi Jinping’s government tightened its control on the internet, universities, and civil society in a comprehensive crackdown. In Xinjiang, it detained at least one to two million Uighur Muslims and other Turkic Muslims to lead to the worst humanitarian disaster in the 21st century,” Teng Biao said, as reported by Zee News.

Teng warns that the CCP is using Chinese apps like WeChat and TikTok to magnify their propaganda. He is also worried about the spread of Confucius Institutes since he believes that they are a huge threat to academic freedom. The U.S. has recently taken action against Confucius Institutes, designating them as foreign missions and demanding regular reports about their activities. In a webinar, Teng exposed the bloody history of the CCP, including the mass slaughter of landowners in 1949, the death of tens of millions of people from famine, the massacre of thousands at Tiananmen Square, and the millions of Falun Gong practitioners sent to prison.