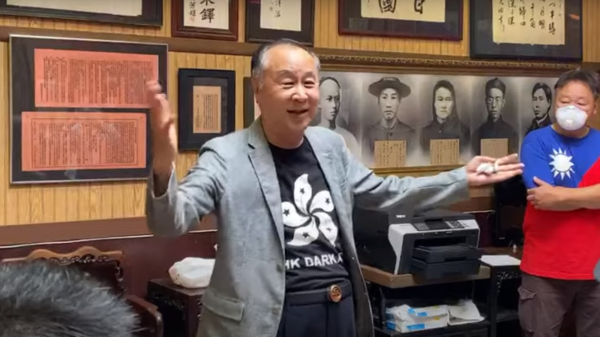 This is part two of a two-part series about a recent presentation given by Hong Kong industrialist Elmer Yuen in San Francisco. Part one can be read here.

Elmer Yuen said: “Hong Kong has been a part of China since ancient times.” This phrase has been heard more than ten thousand times. He reiterated that the CCP does not represent China and that Hong Kong is a part of China and not part of the CCP which the CCP often propagates that it is. The CCP claims to represent 1.4 billion Chinese people. This is deceiving everyone, including foreigners. The Chinese in the mainland are without voting rights.  Elmer Yuen. He also pointed out that Hong Kong belongs to the people of Hong Kong. According to the UN Charter, it is the right of people to determine their own destiny, so rightfully there is no problem with independence, belonging, and federation.

The CCP unilaterally tore up the Sino-British Joint Declaration. Elmer Yuen said that he will take action to sue the People’s Republic of China in a British court within two to three months’ time to compel Beijing to return Hong Kong’s sovereignty. Beijing has lost the credibility and qualification to manage Hong Kong ever again. It is without a doubt that Beijing definitely will disagree. Elmer Yuen estimated that within three months the CCP will bow to the pressure and when it comes to this stage, it is time for them to negotiate.

Elmer Yuen maintained his initiative to classify the CCP as a transnational criminal group and to bring the 90 million party members to trial. For those who want to quit the CCP, there is a mechanism to withdraw from the Party and it is not a problem. The day will come when the members of the criminal group are wanted by the world. Elmer Yuen does not agree with using the Communist Party to eliminate communism. He quoted Deng Xiaoping as an example; although Deng defeated the “Gang of Four,” he went on to cause the June 4 Massacre. The 100-year history of the Communist Party is a history of struggle. One faction defeats the other, yet in the end, it is still the Communist Party. He said that when a new leader takes over, people have high hopes that he would be clean and free from corruption. However, the CCP does not have the rule of law and is not subject to checks and balances, so can it not be corrupt?

Elmer Yuen also pointed out that Xi Zhongzun, who had been in prison for 16 years, was open-minded, but his son, Xi Jinping, became a dictator once he took power. The outcome is determined by the CCP system.

Elmer Yuen said that he is now compiling names of those who are sanctioned for violating human rights. These names are provided by Hong Kong people and he is asking them to sort out the evidence of their crimes to be submitted to the U.S. government in the form of legal documents. The current list includes 18 persons who are members of the University Committee of the University of Hong Kong. They are the people who approved the expulsion of Dai Yaoting, an associate professor at the Faculty of Law at the University of Hong Kong. He has been sentenced to 16 months in prison for involvement in the “Occupy Central.” Elmer Yuen further revealed that he is compiling a list that includes 2,000 Hong Kong police who violently mishandled protesters during the anti-extradition movement. This list will be handed to the U.S. government in the near future.

He hopes that to counter the CCP’s violation of human rights, the U.S. sanctions could incorporate a few areas.

The U.S. can hit the ‘kill switch’ on the CCP at any time

Elmer Yuen, an industrialist in the electronics industry, said that he had done business with technology companies in Silicon Valley from as early as 1973. He is also very familiar with the electronics techno industry. He mentioned that China currently only has the technology for assembling products, but not the core of high technology, such as chips, software, and so on. As such, the United States has many ways to deal with the CCP, such as turning off the operating software in China. “If you can upgrade the mobile phone, you can also turn it off.” All the databases in China use the Oracle Database Software. If the system says “stop,” all the databases will stop running. He gives an example: “Almost all computers use Windows and all mobile phones use either Apple or Android — All American. So no need to fight, just stop all operating systems, and China will stop functioning particularly now that China uses digital currency. If the mobile phone system is disabled, the CCP will lose control of the people in the country.”

The CCP wants to control and manipulate the people. Elmer Yuen cited Falun Gong as an example. Falun Gong never opposed the CCP. However, just because Falun Gong has faith, the CCP felt threatened as so many people believe in Falun Gong. The CCP has vigorously persecuted Falun Gong practitioners for more than two decades, until today. The same goes for Hong Kong people who are seeking freedom. The CCP is afraid of losing control and suppression of the Hong Kong people.