One of the Biggest Rooftop Farms Found in Paris 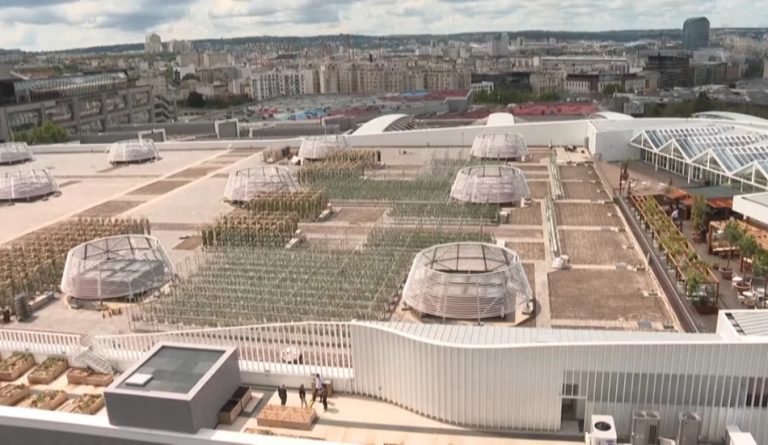 The rooftop farm in Paris is one of the biggest in the world. (Image: Screenshot / YouTube)

At the edge of the French capital of Paris, a company called Agripolis is building a rooftop farm that is expected to supply over a ton of food every day when fully operational. The farm is located at the Paris Expo Porte de Versailles and will be one of the biggest rooftop farms in the world with a size of 140,000 square meters, which is equal to about two football pitches.

Once completed, the farm will grow more than 30 types of plants through organic methods. These plants will be grown in columns, without using soil. They will be fed with rainwater and nutrient-rich solutions. This method cuts down the water needed for the farm. As such, a large harvest can be made from a small area, using minimal water. Project manager Julie believes that the farm is important to Paris for three reasons — for the environment, to teach people about eating healthy, and to educate and build a community.

“The goal is to make the farm a globally-recognized model for sustainable production… We’ll be using quality products, grown in rhythm with nature’s cycles, all in the heart of Paris… Our fresh produce will be used to feed the inhabitants across the south-west of the city — either directly, through veg-box schemes, or via shops, hotels, and canteens — thereby helping to reduce food miles… Furthermore, we won’t be using any pesticides or chemicals, so the farm will be a haven for biodiversity,” Pascal Hardy, founder of Agripolis, said to The Guardian.

There are plans to set up a rooftop restaurant and bar with a capacity of 300 people. This will be run by Le Perchoir, one of the most renowned chains in Paris. The restaurant’s menu will feature food prepared from the produce grown on the farm. Local residents will be allowed to lease plots of the farm where they can grow their own plants. The place will also host educational tours and various other events. The fact that Europe’s biggest rooftop farm is being built in Paris is no accident. The government plans to cover almost 100 hectares of Paris rooftops with greenery by this year, with one-third of the space exclusively dedicated to agriculture.

Even though the Paris rooftop farm being built by Agripolis is huge, it is not the biggest in the world. That honor goes to the recently completed Lufa Farms in Montreal, Canada. The farm is about 163,800 square feet in size and is located atop a defunct warehouse. It grows around 25,000 pounds of tomatoes and eggplants per week. According to an estimate, the farm is capable of producing food enough to feed 10,000 families.

The biggest benefit of rooftop farms is obviously their potential to feed the urban population. It is estimated that almost 50 acres of farmland in America are lost to urban development every single hour. And this one hour also adds 240 people into our population. Decreasing farmland and increasing population only points to a chaotic future.

Rooftop farms can solve this to a good extent by converting unused spaces into food-producing centers. By feeding the population of the city from within the city, we can also cut down the cost of vegetables and fruits, as well as ensure the freshness of the produce. Rooftop farms also cool buildings, which translates to less use of air conditioners and an eventual reduction in carbon emissions.