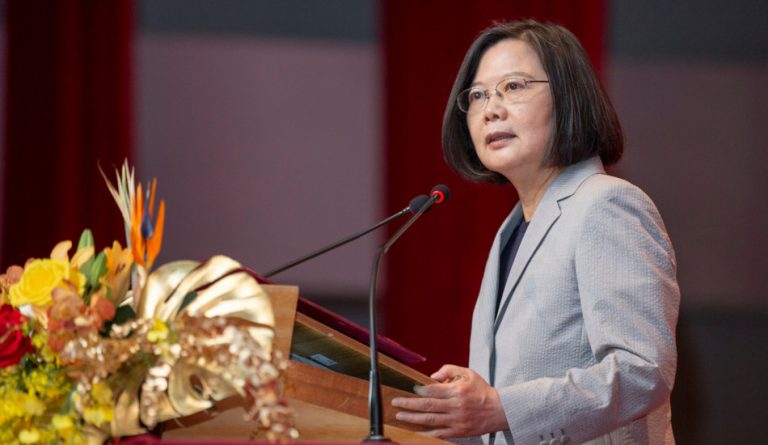 The President of Taiwan, Tsai Ing-wen, reiterated that her country is committed to protecting freedom and democratic values. (Image: 總統府 via flickr CC BY 2.0 )

China has ramped up its aggressive territorial policies in recent months, overturning the autonomy of Hong Kong, engaging in border conflicts with India, and firing missiles into the South China Sea. Chinese jets have also been increasingly breaching the airspace of Taiwan. In a speech to the Australian Strategic Policy Institute, the Taiwanese President, Tsai Ing-wen, reiterated that her country is committed to protecting freedom and democratic values.

During her speech, Tsai called on like-minded nations to work together to ensure Taiwan’s security, which she believes is critical for the stability of East Asia. She pitched Taiwan as a dependable ally of democratic countries and promised to pursue stronger ties with Western nations. She made special mention of the United States, with which Taiwan is developing deep military and technological ties. Ever since Tsai became President of Taiwan, Beijing has been excessively aggressive toward the island nation and has even cut off official contact with Taipei.

China sees Taiwan as a wayward province that should be brought under its control, even if it involves military invasion. However, Taiwan rejects such claims and sees itself as an independent entity. “Taiwan is Taiwan, our existence simply cannot be questioned. We have our own government, we have free elections and our people can choose their own leaders… none of which have ever been under Beijing’s jurisdiction… The future of Taiwan is to be decided by the people of Taiwan. This is what we have been insisting,” Tsai said, as reported by the Hong Kong Free Press.

As to engaging in talks with China, Tsai remarked that it would only happen if China starts contributing to a beneficial bilateral relationship. In July, the acting chief of Taiwan’s consulate in Hong Kong came back to his country after refusing to sign a document that validated China’s territorial claim over the island. China refused to renew the official’s visa unless the document was signed. In retaliation, Taiwan rejected renewing the visas of Hong Kong officials.

In Taiwan’s new passport design, which will officially be rolled out next year, the country has removed the English words “Republic of China” that used to be featured prominently on top. Instead, these words have been written in small letters, wrapped around the Taiwanese emblem. The Chinese words for the “Republic of China” remain in the new design. In addition, the word Taiwan is now displayed in big, bold letters. An official pointed out that the design changes were intentionally done to diminish the importance of the word “China” so as to avoid confusion in these “sensitive times”.

A Czech delegation visited Taiwan recently, triggering an outburst from China. The delegation consisted of 90 Czech politicians, scientists, entrepreneurs, and journalists. The leader of the delegation, Miloš Vystrčil, gave a speech in the Taiwanese parliament and met with President Tsai Ing-wen. Chinese Foreign Minister Wang Yi described the delegation’s visit as a “provocation” and warned that his country will make Vystrčil pay a high price.

Germany publicly rebuked Beijing and advised the country to stop threatening Europe. During a meeting with Yi, German Foreign Minister Heiko Maas stated that Europeans stood together shoulder to shoulder and that China’s threats have no place in the region. He asked that China withdraw the draconian National Security Law it has imposed in Hong Kong and allow UN officials to gauge the condition of the Uyghur community in Xinjiang.