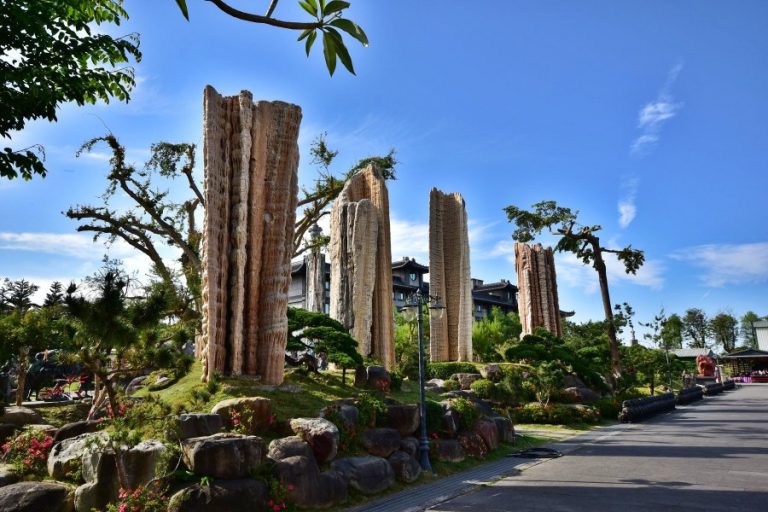 Nestled in the countryside near the Zengwen Reservoir in Nanxi District in southern Taiwan’s Tainan City is a magnificent garden affiliated with a Buddhist temple, Dazhishan Xuankong Temple. With a breathtaking garden, the temple ranked first among the 100 most beautiful religious sites in Taiwan in an online poll conducted by the Ministry of Interior in November 2013.

The Trail of Life

Covering an area of about 3 hectares (7.4 acres), the temple is known for its “Trail of Life” (生命之路), which is a 300-plus-meter-long winding path surrounded by stunning scenery. Standing at the entrance of the trail is the Lingbi stone, which has a distinctive shape symbolizing a warm welcome to visitors. Visitors may have to contort their bodies or lower their heads to walk through the hole in the stone before exploring the trail.

The Trail of Life claims to be the longest of its kind in Taiwan. It features a large exhibit of outdoor art including a variety of tree fossils, limestone columns, statues, and many other types of stones, as well as splendid Taiwan white pines and old intertwined pines.

At the center of the temple is the Sacred Stone of Buddha, a 152-ton limestone boulder with a length of 10.4 meters, a height of 4.7 meters, and a depth of 1.2 meters. It is from eastern Taiwan’s Hualien County and is the largest of its kind in Taiwan.

The largest Lingbi stones in Taiwan

There are three massive Lingbi stones (靈璧石) displayed in the garden, weighing 173, 165, and 98 tons respectively. Two of them were erected at the entrance of the temple, and the third is placed in the Bodhi Garden.

Originating in Lingbi County in China’s Anhui Province, the Lingbi stone is considered the most remarkable among the four types of stone deemed beautiful by most Chinese.

There are many exhibits of majestic petrified wood (樹化石), which are around 100 to 200 million years old. It is said that petrified wood has the power of protecting people against evil spirits.

Due to its scarcity, Myanmar has banned the mining and export of petrified wood since 2006, and this precious fossil has been nominated for UNESCO World Heritage Status.

One of the most amazing sights at the temple is its 5,000-year-old precious stalactites standing tall in the picturesque garden. There are 11 stalactites in various sizes in the temple grounds, and most of them are so massive that they look like skyscrapers.

Other stones and statues

Additionally, there are a wide variety of odd-shaped rocks and statues scattered throughout the garden, including the thousand-year-old Buddha head statue from China, which gives the garden a peaceful and dignified ambiance.

The garden of Dazhishan Xuankong Temple is also a great location to take in the 500-meter-long Yongsing Suspension Bridge, which is the longest bridge in southern Taiwan. With an eye-catching purple color, the bridge is gorgeous and is one of the most popular tourist attractions in Tainan.