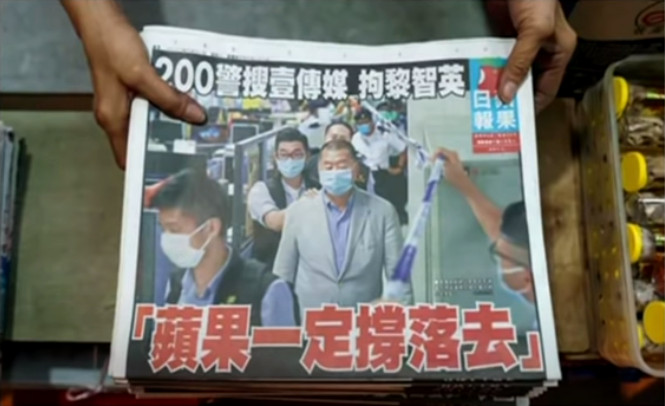 After the National Security Law came into effect in Hong Kong, authorities have been attacking human rights and pro-democracy activists. Many countries, including the U.S., have condemned the law since it erodes the autonomy of Hong Kong, which was guaranteed to exist until 2047.

The National Security Law gives authorities the power to crack down on any media outlet that publishes news contrary to the interests of the Chinese Communist Party. This can be done by charging the outlet with “colluding with foreign enemies,” “causing a social disturbance,” “instigating secession,” and so on. The New York Times announced that it would be relocating some of its staff members from Hong Kong to South Korea. In China, journalists need to get accreditation from the government before they can start working. Some fear that similar measures might be imposed on foreign journalists operating in Hong Kong.

Enforcement agencies can now remove content from social media that they feel is “bad” for the city, that too without getting a judicial warrant. The private data of users can also be obtained without any legal complications. As a consequence, platforms like Facebook, WhatsApp, Google, Twitter, etc., have all stopped processing user data information requests from the Hong Kong government.

Hong Kong authorities are reforming the textbooks of school students to ensure that their content aligns with CCP ideology. Things like separation of powers, environmental pollution in the mainland, and so on have been removed. A textbook mentioning China’s censorship of Western movies had been edited to refer to the government’s controls on “imported cultural products.”

The Education Breakthrough and Progressive Teachers’ Alliance has demanded the Hong Kong education bureau to publicize the standards they are using for revising textbooks.”The space between the political red lines in the field of education is going to get smaller and smaller… Whenever a major event occurs and is subject to a crackdown by the [Chinese] government, booksellers will withdraw [books] and revise them to a version that is closer to the government’s view… Liberal Studies textbooks in future will be nothing but a paean to the [Hong Kong] and Chinese governments,” Education Breakthrough spokesman Isaac Cheng said, as reported by Radio Free Asia.

The National Security Law will allow Beijing to take custody of suspects from Hong Kong and conduct their trials on the mainland. The Chinese judiciary is famously known to be partisan, always taking the side of the communist government. As such, a trial in the mainland is basically a guarantee that people classified as “dangerous” by Beijing will not be treated fairly. People can even be caught and secretly detained, with their family members never knowing what happened to them.

If you think the National Security Law is only applicable to Hong Kong, you are grossly mistaken. The law is applicable to every person on the planet. This means that if you have passionately spoken against the communist party while living in Australia and you plan on visiting Hong Kong for some reason, you can be arrested by Chinese officials the moment you land at the Hong Kong airport. They will simply charge you under the security law, sending you to jail or forcing you to pay expensive fines.