4-Meter Reptile Found in the Belly of Prehistoric Marine Carnivore 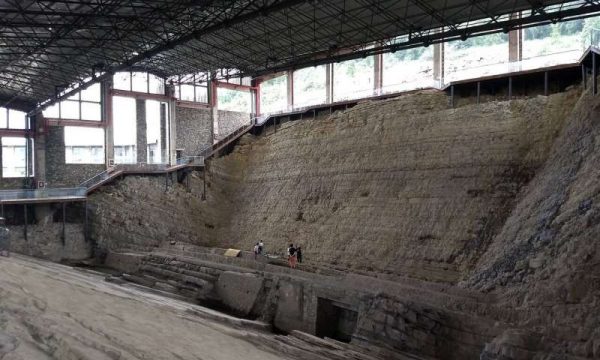 The quarry dig site where ichthyosaur and thalattosaur were uncovered, now part of the Xingyi Geopark Museum in China. (Image: Ryosuke Motani)

When paleontologists digging in a quarry in southwestern China uncovered the nearly complete skeleton of a giant, dolphin-like marine reptile known as an ichthyosaur, they didn’t expect to find another fossil in its stomach. This second skeleton belonged to a four-meter-long, lizard-like aquatic reptile known as a thalattosaur and is one of the longest fossils ever found in the stomach of a prehistoric marine reptile.

While the researchers can’t say for sure whether the thalattosaur was scavenged or preyed upon, their work could be the oldest direct evidence that Triassic marine reptiles like ichthyosaurs — previously thought to be cephalopod feeders — were apex megapredators. The findings appear in the journal iScience. Co-author Ryosuke Motani, a professor of paleobiology at the University of California. Davis said:

“If you look across all the similar marine reptiles that lived in the age of dinosaurs, we’ve actually never found something articulated like this in the stomach. Our ichthyosaur’s stomach contents weren’t etched by stomach acid, so it must have died quite soon after ingesting this food item. At first, we just didn’t believe it, but after spending several years visiting the dig site and looking at the same specimens, we finally were able to swallow what we were seeing.”

Because stomach contents are rarely found in marine fossils, researchers rely on tooth and jaw shapes to learn what prehistoric species may have eaten. While prehistoric apex predators are typically thought to have large teeth with sharp cutting edges, some modern predatory species like crocodiles use blunt teeth to consume large prey items with grasping force instead of cutting. Ichthyosaurs share these blunter teeth, but with no direct evidence of large prey consumption in these prehistoric marine reptiles, scientists believed that they fed on small prey like cephalopods.

However, the discovery of the giant thalattosaur in the stomach of the ichthyosaur found by Motani, Da-Yong Jiang, a paleontologist at Peking University in China, and their team suggests that this was not the case, saying:

“Now, we can seriously consider that they were eating big animals, even when they had grasping teeth. It’s been suggested before that maybe a cutting edge was not crucial, and our discovery really supports that. It’s pretty clear that this animal could process this large food item using blunt teeth.”

While the researchers now know that the ichthyosaur could eat animals as large as the thalattosaur, they don’t know if it killed this individual, or simply scavenged it. “Nobody was there filming it,” says Motani. However, there is reason to believe this was not a case of scavenging: Modern marine decomposition studies suggest that if left to decay, the thalattosaur’s limbs would disintegrate and detach before the tail. Instead, the researchers found the opposite in these fossils.

The thalattosaur’s limbs were at least partially attached to its body in the stomach, while a disconnected tail was found many yards away, leading the researchers to believe it was ripped off and left behind by a predator like the ichthyosaur. Whether or not the ichthyosaur killed its last meal, the fossil provides the oldest direct evidence that these giant marine reptiles consumed animals larger than humans. Motani said:

“We now have a really solid articulated fossil in the stomach of a marine reptile for the first time. Before, we guessed that they must have eaten these big things, but now, we can say for sure that they did eat large animals. This also suggests that megapredation was probably more common than we previously thought.”

The team is still excavating the site where the pair of fossils were found, which has now been turned into a museum. Motani concluded by saying:

“We’ve been digging in that particular quarry for more than ten years now, and still, new things are coming out. At this point, it’s beyond our initial expectations, and we’ll just have to see what we’ll discover next.”

Provided by: Cell Press [Note: Materials may be edited for content and length.]