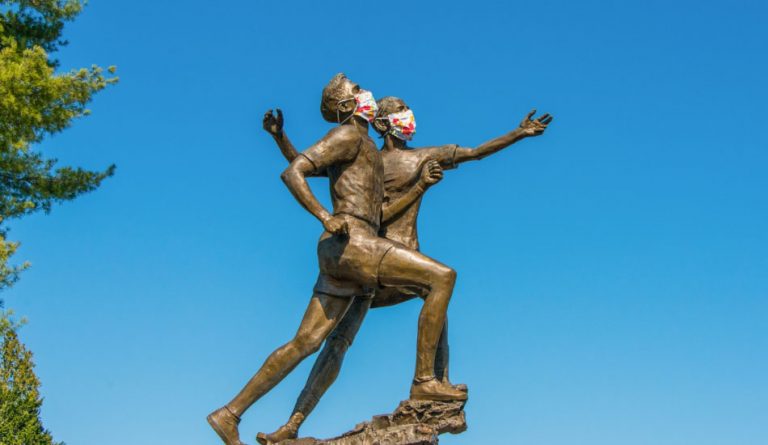 The COVID-19 outbreak has made face masks a part of our daily lives. In China, face masks were used for an interesting reason prior to the pandemic — to cover the faces of statues as a sign of protest against China’s high levels of pollution.

It was around 2014 that the trend of putting face masks on statues became mainstream in China. Students from Beijing’s Peking University put masks on statues around the campus as a silent protest against the smog polluting the air. At that time, the national meteorological center had issued smog alerts for several days consecutively, angering residents who were finding it difficult to breathe properly. Statues of intellectual Li Dazhao, politician Cai Yuanpei, and Spanish writer Miguel de Cervantes were seen with face masks.

Most people online appreciated the students for coming up with an innovative way to protest against pollution. Some people claimed that rising pollution was a sign of increasing inequality and stated that only by creating equality will pollution be brought under control. Others noted that pollution was triggered due to humanity’s unscrupulous hunger for development and lamented that common people bore the brunt of the harm. The smog situation at that time was so severe that online face mask sellers were reportedly facing a tough time meeting demand. Many of them even ran out of stock.

In 2016, a series of environmental protests kicked off after the city of Chengdu got shrouded in thick smog. Residents started placing face masks on statues. The police arrested several of the protestors and also asked businesses to report anyone placing large orders of face masks.

The rapid economic progress in China has driven up pollution in the country. Cities like Beijing tend to be hazy most times due to the pollutants spread in the atmosphere. According to a study published last year, pollution kills 8.3 million people annually, with more than 1.86 million deaths accounted for by China. The country was in first place when it came to deaths per 100,000 inhabitants with a figure of 287.

The outbreak of COVID-19 has cut down air pollution in China since economic activity has remained pretty subdued. Between January and July, average concentrations of PM2.5 lung-damaging particles fell by about 10.8 percent. But despite this decline, China’s PM2.5 national standard of 35 micrograms per cubic meter is still well above the WHO’s recommended maximum level of 10.

“There was a temporary pollution increase in April but it quickly went down in May… We need to see if July represents the beginning of a larger trend… Industrial outputs are coming back to pre-COVID levels… Sometimes air quality would correspond with that, sometimes not. Weather and other conditions play a role here too,” Li Shuo, senior energy and climate analyst with Greenpeace, said to Reuters.

The government has recently introduced several new laws to curb pollution. In the province of Hebei, local authorities have promised cash rewards of 100,000 yuan (US$19800) for whistleblowers who report incidents of pollution. Being a major steel production center in China, Hebei has been battling severe pollution for years. Shenzhen will apparently encourage environmental lawsuits from October this year. However, the government is also responsible for the rise in pollution. In the first half of 2020, over half of the world’s new coal power plants were built in China, which is a huge setback to the efforts to reduce carbon emissions.