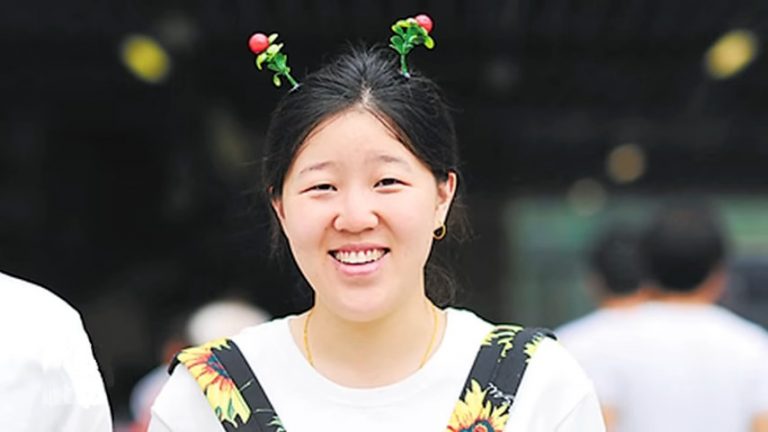 A weird trend spread across China in 2015 when people began sporting plastic decorations in the shape of plants, vegetables, and fruits on their heads. (Image: Screenshot via YouTube)

Fashion trends can sometimes be bizarre, bordering on ridiculousness. A weird trend spread across China in 2015 when people began sporting plastic decorations in the shape of plants, vegetables, and fruits on their heads. While the fad seems to have died down now, this bizarre “plant fashion” remains one of the weirdest in China’s recent history.

Nobody knows exactly how the trend started. A few people are said to have clipped a bean sprout in their hair, making it stand erect like a flagpole. This apparently began to be copied and soon people started wearing all kinds of plastic vegetation in their hair, including things like chilies, lavender, sunflowers, berries, chrysanthemums, and so on.

“This shows that in China now we’ll try almost anything that we see on the Internet… Nobody knows what it means, but we do it anyway,” a student wearing a sprig of clover said to The New York Times. Local media reports suggest that the plant fashion trend may have been inspired by ancient Chinese teachings on living harmoniously with nature. Others think that Japanese-style emoticons might have triggered the trend. The Teletubbies, the 1990s TV show that featured cute aliens with antennas on their heads, are also seen as a possible source of inspiration.

Some also point out that the trend might be a statement about appreciating nature and a protest against the smog-filled environment of cities like Beijing. Most people who wear plants on their heads think that the trend started in the southwestern city of Chengdu. As to why people got attracted to the fad, the simplest explanation is that it looked strange and cute enough to make people want to try it out just because “everyone else was doing it.”

Throughout history, many civilizations have had some bizarre fashion ideals. In China, lotus shoes were popular just a few centuries back. These shoes were worn by girls who had their feet bound in order to make them look tiny. Family members used to break the girls’ feet when young to ensure that they grew in the preferred lotus shape. Obviously, walking with such feet was incredibly difficult and many women developed health issues due to the practice. But all this discomfort did not affect the popularity of lotus feet and shoes.

During the Victorian era, dresses that were bottle-green in color were quite the rage. They were expensive as well. To get this green color, the fabric was dyed in large quantities of arsenic. Despite the dangers, women blinded by fashion wanted to desperately wear them. As a result, many women developed impaired vision, adverse skin reactions, and nausea. The people who manufactured these clothes ended up suffering the most, with many of them dying due to the exposure.

In current times, a rising fashion trend seems to be that of extra-long sleeves. Such clothes usually have sleeves that are so unnaturally long that they completely cover your hands and even extend a few centimeters beyond that. Some people have questioned the practicality of the clothing since every time you want to use your hands for some purpose, you will have to push your sleeves up out of the way. However, discomfort and impracticality have never actually stopped people from adopting fashion trends. So the extra-long sleeve trend might be something that we will soon see in our daily life.