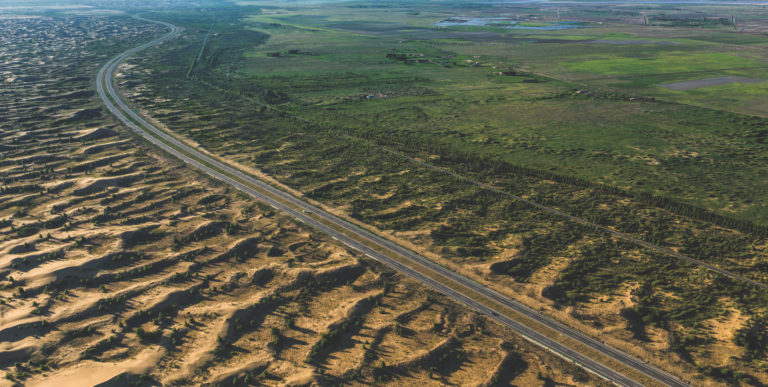 At the Mu Us Sandyland ecological restoration site in northern China, checkerboards of straw have been arranged in the shadows of sand dunes. Grasses and other types of plants are introduced there to help return desert to green space. But the practice has resulted in the depletion of terrestrial water stores, UCI Earth system scientists found in a recent study. (Image: Erik Solheim)

Through concerted, policy-driven efforts, China has converted large swaths of desert into grassland over the past few decades, but this success has come at a cost. In a study published recently in Nature Sustainability, scientists at the University of California, Irvine report that the Asian nation’s environmental reclamation programs have substantially diminished terrestrially stored water. Co-author Isabella Velicogna, UCI professor of Earth system science, said:

“Large-scale ecological restoration is an increasingly popular human practice to combat land degradation and climate change. However, the impact of this on water resources until now had been understudied. We found that such programs in northern China are depleting total land water resources at an alarming rate, which was a surprise.”

Combining data from NASA’s Gravity Recovery and Climate Experiment satellite mission, Chinese government reports, environmental observations, and results from climate simulations, the UCI researchers constructed a continuous record spanning the pre-environmental reclamation period (1982-1998) and the post-restoration period (2003-2016). This is the first such study to take into account all hydrologic resources, including groundwater, soil moisture, surface water, snow, and ice.

The team focused its analysis on northern China’s Mu Us Sandyland area and learned that reclamation efforts there led to an increase in total annual reserve consumption of about 16 millimeters, equal to the loss of 21 cubic kilometers of freshwater during the post-restoration period. Lead author Meng Zhao, a Ph.D. student in Velicogna’s lab, said the group chose to study the Mu Us Sandyland because China has had success in renewing vegetation and reversing desertification there.

Also, the location has limited exposure to other forms of groundwater depletion, such as agricultural pumping or coal mining, giving scientists an opportunity to isolate the effects of China’s ecological reclamation projects on terrestrial water storage. The GRACE satellite mission was launched in March 2002, putting it in place to make direct observations of the groundwater supply in the post-restoration period. During this time, GRACE data showed an average depletion rate of about 7 millimeters per year resulting from revegetation programs.

Between 2003 and 2016, however, an average of just under 9 millimeters annually was added to total terrestrial water stores by a wetter climate, even taking into account a drought in 2005. In comparison, the team analyzed Chinese government precipitation records against evapotranspiration and runoff data to calculate a trend of water storage growth of nearly 7 millimeters annually in the pre-reclamation span of 1982-1998. The results clearly showed the hydrologic impact of human influences in the region, Zhao said:

“Thanks to the data from the GRACE mission, we were able to develop a comprehensive view of the ecological restoration projects’ effect on water storage, while before it was only possible to look at partial components. Our findings will help reevaluate the success of reclamation practices in terms of protecting water resources.”

And will this water storage depletion continue in the future? Study co-author Geruo A, a project scientist in Velicogna’s lab, said:

“Quite likely, if the stakeholders opt to maintain or elevate the level of restoration effort. However, reducing revegetation and relying more on natural regeneration is favorable, given the current climate, and will likely slow down or even reverse the trend of water depletion.”

Provided by: Brian Bell, University of California, Irvine [Note: Materials may be edited for content and length.]