US Lawmakers Demand Answers From Disney Over Mulan Xinjiang Scandal 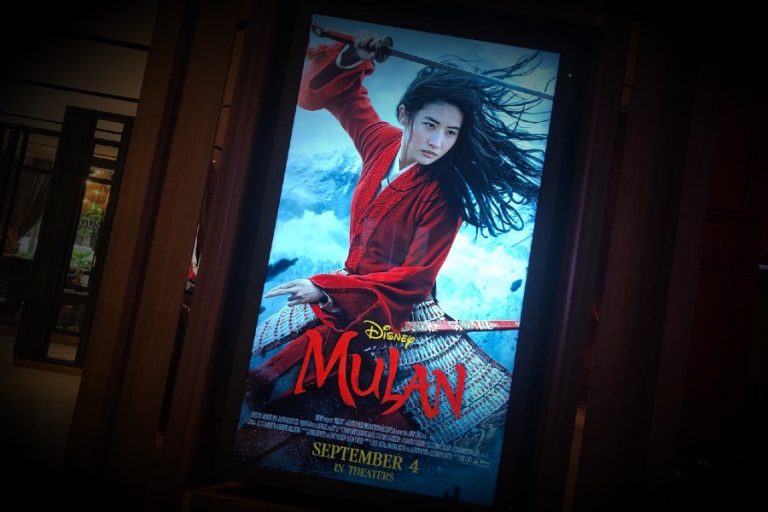 A digital poster for the controversial Disney movie 'Mulan' as seen at a cinema in Bangkok, Thailand. (Image: via Nspirement)

Twenty U.S. lawmakers have asked the CEO of Disney for an explanation as to why the movie Mulan was filmed with the assistance of Chinese security forces in Xinjiang where over a million Uyghurs and other Turkic Muslims are being held in reeducation camps.

Congressman Christopher H. Smith, along with Senators Marco Rubio and Tom Cotton, were among the 20 who signed a letter to Bob Chapek, Disney’s CEO, about why the media giant worked with Chinese security and propaganda authorities during the production of Mulan, which was just released in Chinese cinemas on September 11.

The letter from the lawmakers, dated September 11, pointed out that a U.S. government department had listed the mentioned Turpan security bureau over “human rights violations and abuses in the implementation of China’s campaign of repression, mass arbitrary detention, and high technology surveillance against Uyghurs, Kazakhs, and other members of Muslim minority groups” in the Xinjiang region.

The letter pointed out that the Xinjiang “Publicity (or Propaganda) Department — which is an arm of the Chinese Communist Party (CCP) — has denied, distorted, and otherwise covered up these crimes against humanity that also include forced labor and a campaign of mass sterilization, forced abortions, and birth suppression against Uyghurs.”

The lawmakers went on to state that publicly available information prior to the 2018 filming of Mulan revealed the reality of mass internment camps detaining Uyghurs.

“By July 1, 2018, major news outlets in the United States, Australia, United Kingdom, and Hong Kong all had reported that Beijing had interned hundreds of thousands, if not more than one million, Uyghurs and minorities in the XUAR [Xinjiang Uyghur Autonomous Region],” the letter said. “The decision to film parts of Mulan in the XUAR, in cooperation with local security and propaganda elements, offers tacit legitimacy to these perpetrators of crimes that may warrant the designation of genocide.”

The letter then went on to request from Chapek information concerning the Chinese state’s involvement in the filming of Mulan in Xinjiang.

Among the questions were those asking how much involvement the communist security and propaganda entities have in the filming of Mulan and if there were any contractual requirements made by or requests made to Disney by these entities and any other CCP or People’s Republic of China (PRC) entities to have their names in the credits.

The lawmakers also asked Chapek to describe the extent to which Disney officers and senior executives were aware, while filming Mulan, that a campaign of mass surveillance and detention was being waged by the state against Uyghurs and other Muslim minorities in Xinjiang.

“If they were not aware, how will The Walt Disney Company ensure their officers and executives are made aware of publicly reported mass surveillance and detentions in the future?” the letter asked.

“Please describe the extent to which film and production teams were aware of mass surveillance and detention of Uyghurs and other Muslim minorities in the XUAR while they were researching and filming the location?” was another question.

“Please describe the reasoning that led The Walt Disney Company to go ahead with the filming of Mulan in light of these widely available and credible reports of the PRC and CCP’s egregious human rights abuses in the XUAR, and whether filming within the XUAR was related to ensuring access to the PRC market,” being another example.

As of the publishing of this article, Disney has not commented on the Mulan thank you credit controversy or on its filming in Xinjiang.

Mulan had already gained the social media hashtag #boycottMulan after one of its stars, Liu Yifei, gave support via Weibo to Hong Kong police during pro-democracy protests in the city last year. Liu plays the film’s lead role.

Watch the Vice report China’s Vanishing Muslims: Undercover In The Most Dystopian Place In The World — first broadcast in June 2019.