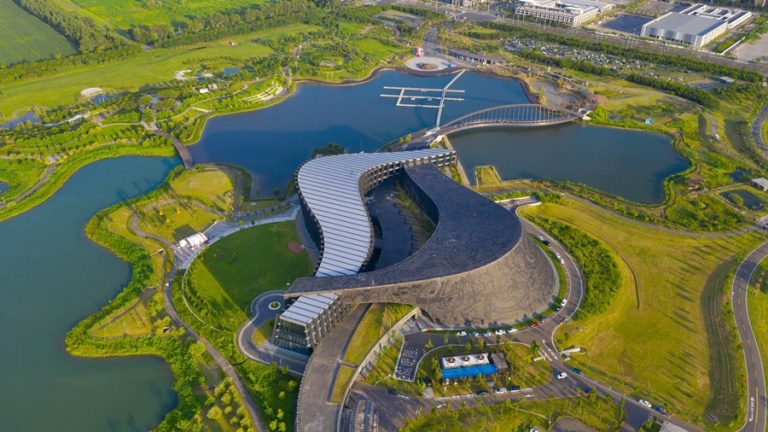 Known for its rich collection of nearly 700,000 antiquities spanning about 7,000 years from the Neolithic to modern times, the National Palace Museum (NPM) located in northern Taiwan’s Taipei City is one of the largest and best museums in the world.

To balance cultural resources between the north and the south, as well as enhance the development of arts, economy, education, and tourism in southern Taiwan, the Southern Branch of the National Palace Museum was thus established in Chiayi County.

Taking up an area of about 70 hectares (173 acres), the Southern Branch was opened on a trial basis in December 2015, and was formally opened in August 2016 after approximately 15 years of planning and construction.

Like an exquisite giant work of sculpture, the Southern Branch is a stunning compound. It was designed based on conceptual inspiration from the three traditional Chinese painting styles of nongmo (濃墨thick ink), feibai (飛白dry brush), and xuanran (渲染ink wash).

Covering an area of 20 hectares (49 acres), the main building is composed of the east wing, the west wing, and the courtyard. The west wing is the Mo­yun Hall (墨韻樓), which symbolizes the solid mass (實量體) and is used for exhibition spaces and artifact archives.

The east wing is the Fei­bai Hall (飛白館), denoting the void mass (虛量體) that houses the lobby, the educational space, the restaurant, and the souvenir shop.

The sloping entry walkway and the courtyard between the two wings represent xuanran (渲染). As the Southern Branch boasts the gateway to Asia, the three symbolic cursive strokes in fact represent the ancient civilization of China, India, and Persia. Furthermore, the museum compound’s two streamlined masses symbolize the cultural meaning of the dragon, elephant, and horse.

Additionally, there are many distinctive art installations displayed in the park, including the Ancient Column (Taiwan), Joy of Tea, Phoenix Touching Water (Taiwan), Ancient Molten Gold — A Brocade of Flowers (Taiwan), Spirit of Pumpkin (Japan), Timeless Waterfall (Japan), The Present (Vietnam), To the Best of My Mind (Iran).

There is also a scenic bridge crossing the southern part of the lake, which leads to the museum’s entrances at the courtyard between the two interlinked bow-shaped structures. It is a 141-meter single-span arch suggesting the idea of cursive script calligraphy.

Though the Southern Branch was built mainly to showcase artifacts from diverse Asian civilizations, many of the masterpieces, including the Jadeite Cabbage, the Jade Duck, the Animal-shaped Zun Vessel, the Vase in the Shape of a Horned Fish, etc., are currently exhibited in the Southern Branch. Other exhibitions are as follows:

-A Space for Brush and Ink: Appreciating paintings and calligraphy in NPM’s collection

-The Far-Reaching Fragrance of Tea: The art and culture of tea in Asia

-Imprints of Buddhas: The Buddhist art in the NPM’s collection

-Understanding Asian Art: Taking Taiwan as a foothold for gaining a perspective of Asia as a whole.

-The Khubilghan: The Incarnated Lamas of the Qing Dynasty and Related Artifacts

-Feast of Bronzes: Rituals and Music from Ancient Times

-Our Beloved Treasures: Masterpieces in the National Palace Museum Collection