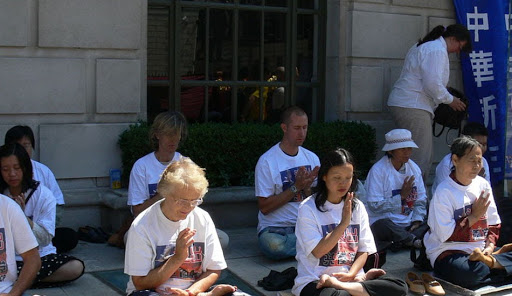 The Chinese communist government has launched a new campaign against the followers of Falun Gong, aiming to crush the faith. Called “Zero-Out,” it has been launched by the 610 Office and the Political and Legal Affairs Committee, two entities that are specifically tasked with persecuting Falun Gong followers.

The zero-out campaign aims to reduce the number of Falun Gong practitioners to zero. During the past two decades, the CCP has blacklisted almost every Falun Gong practitioner in China. Back in 2004 when the government-issued ID cards to citizens, Beijing had placed a special code in the IC chips of the cards belonging to Falun Gong practitioners. So when these people use the ID cards for any purpose, say applying for a passport, they will be flagged. In some areas, the police carry devices that alert them if the ID card is within 30 meters. Even if a person had renounced Falun Gong due to the persecution, their names will still be on the blacklist.

The Zero-Out campaign will refresh the blacklist. “The police are harassing practitioners on government lists, collecting their personal information, and asking them to sign prepared statements to renounce Falun Gong… if the practitioners signed the renunciation statements, the officers would remove their names from the blacklist and wouldn’t harass them in the future… Many practitioners had their homes ransacked, and some had their cellphones taken. Several of their family members were also targeted and ordered to persuade their loved ones to give up their faith,” according to Minghui.

The Chinese communist government is calculating that many registered Falun Gong practitioners might find the idea of being treated like a regular citizen attractive, and thus be willing to renounce their faith. In one incident, police deceived a Falun Gong practitioner to open the door of his home by posing as census workers. The person was taken to a hospital, later escaped, and has apparently been hiding from authorities.

Another practitioner, an older woman, was harassed by officers who also tried taking pictures of her home. They even called up her daughter to persuade her mother into giving up the spiritual practice. However, the daughter merely commented that her mother spent eight years in jail for Falun Gong and could not be persuaded to abandon her faith.

To encourage the public to report on Falun Gong adherents, Beijing has begun handing out cash rewards for citizens to provide such information to the local police. The rewards can go up to 100,000 yuan (US$14,300) depending on how valuable the victim is. For an average Chinese person, this is a huge sum of money. In fact, the CCP is betting that this reward will entice citizens to spy on Falun Gong followers, making their life difficult. In some regions, the cash reward programs have been in practice for around three years.

In Hainan Province, the police issued a notice warning that activities like producing or distributing flyers, books, CDs, etc., in support of Falun Gong are deemed illegal. In the province of Anhui, authorities asked people to report on “heretical teachings.” Those who find banners, flyers, etc., and report to authorities will receive a reward of up to 500 yuan (US$72). People who report on gatherings and activities of Falun Gong followers can earn up to 10,000 yuan (US$1,430).