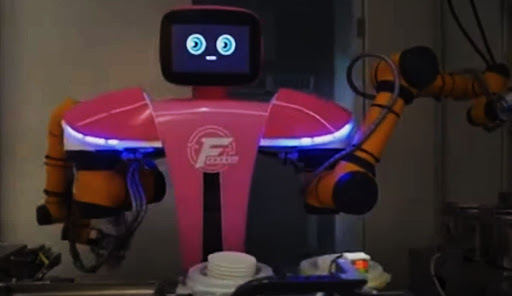 Chinese real estate developer, Country Garden, recently opened what it claims is the first-ever “robot restaurant complex” in the world in the southern province of Guangdong, The restaurant, FOODOM Tianjiang Food Kingdom, is located in the Shunde District, a region that is often known as the cradle of Cantonese cuisine.

In FOODOM, the robots not only cater to customers but also do other tasks like selecting ingredients, storing produce, accepting deliveries, and so on. The facility is operated by Qianxi Robot Catering Group, which already manages five other automated restaurants. The place can seat 600 diners at a time and is equipped with 40 robots capable of cooking around 200 dishes. Three types of cuisine are offered by the restaurant — fast food, hot pot, and Chinese.

The Deputy General Manager of Qianxi Group, Xiao Ran, pointed out that robot cafeterias use less space than regular human-manned ones. Plus, the robots also took less time to cook dishes when compared to their human counterparts. One of the robots that specialize in making noodles occupies just 4 square meters of space and is capable of delivering up to 120 dishes if necessary. The robots learned cooking by observing and imitating professional chefs. The absence of human contact means that there is less fear of the spread of infections like COVID-19.

“A complete scientific control system and the widespread use of smart equipment reduce the risk of [COVID-19] infection… This makes it safer and more hygienic… For a simple-looking dish like chicken broth cabbage, the frying temperature, frying time, the number of times it should be flipped — all of these variables need to be adjusted over the course of more than a thousand attempts,” Ran said, as reported by WeForum.

So how do customers feel about the restaurant? Many are delighted and give high marks for the food. One diner claims that the robot chefs are capable of competing against even the top human chefs from Shunde. In fact, one such famous local chef did give the restaurant a thumbs up after tasting the dishes prepared by the robots. However, there were some negative reviews as well.

One customer noted that the dishes lacked a human touch, with ingredients being too precisely cut. After all, the robot chefs do follow a standard cooking process, which essentially makes every single dish look and taste almost the same. Country Garden has set up the robot restaurant at a cost of around 200 million yuan (US$29 million).

The spread of robot restaurants will inevitably spark a strong resistance from human workers who stand to lose a lot from this trend. Country Garden plans on opening up to 1,000 restaurants throughout China in the next two years.

If one were to assume that an average restaurant employs 4 people, it would mean the loss of 4,000 jobs. If these restaurants prove successful, hundreds of other investors are going to jump in to set these robots restaurants, essentially displacing a large number of people who depend on the industry for employment.

In the U.S, more than 15 million workers are employed in the restaurant industry. Just like in China, robot restaurants will soon attract the attention of investors. In the past, the possibility of launching automated trucks on American streets had triggered a huge protest from truck workers. Similarly, India has seen protests by cab drivers against the spread of automated cars.