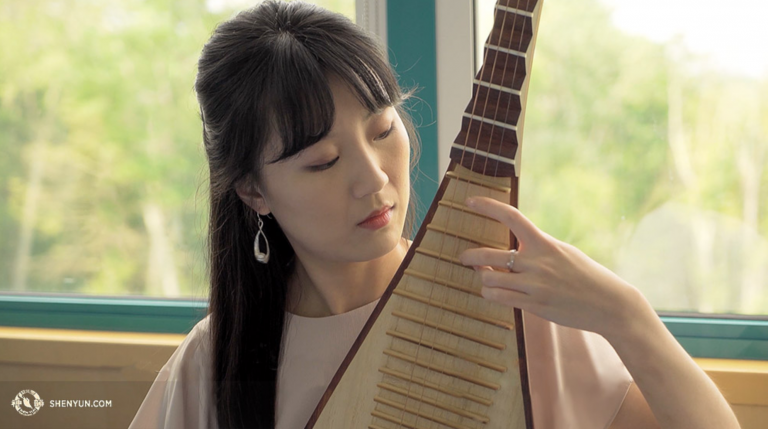 Pipa player Yu Liang of Shen Yun Performing Arts recalls how she and her family were persecuted in China for their beliefs. (Image: via Shen Yun)

Yu Liang is a member of Shen Yun Performing Arts, a company that travels the world spreading Chinese culture as well as exposing the brutality of the Chinese communist regime. While living in communist China, Yu Liang only faced misery and helplessness as she had to watch her life and that of her family slowly be destroyed by pro-communist forces in the country.

A horrible life in China

Yu Liang remembers a morning in August 1999 when her mom woke her up and asked whether she would practice the Falun Dafa exercises with her. As a child, Yu Liang wasn’t aware of the political climate of those times. After all, she was just around 4 years old. The Chinese government was brutally cracking down on Falun Gong adherents, caricaturing them as lunatics who propagated superstition. To practice Falun Gong in the open was basically inviting persecution from the communist regime. And unfortunately, that is exactly what happened.

A few minutes into the Falun Gong exercises, Yu Liang suddenly opened her eyes after being disturbed by all kinds of noises around her. She saw a swarm of police officers and secret agents coming her way. They took her mother away in a van along with all the female participants in the exercise group. Yu Liang was the only one left, wondering what just happened. Her mother remained in detention for about a year. After her release, her mother petitioned the government over the abuse she had suffered. However, this only brought further misery as she was arrested and detained again and again.

For almost two years, Yu Liang never saw her mother. And by 2001, she only had the company of her father. Yu Liang asked her father several times when her mother was coming back. Every single time, her father would whisper that her mommy would be back soon. As years passed and Yu Liang went from being an elementary school student to a college student, she faced constant harassment for her decision not to join the Communist Party. She was even interrogated. Both her parents were targets of constant bullying at their places of work.

“The news of fellow practitioners — those uncles, aunties, grandpas, grandmas, big brothers and sisters I had known since I was a child — how they were illegally arrested, sent to labor camps, or jailed… it seemed endless… Each day in China, I lived in deep fear that those nightmarish times would come back to haunt us. I constantly wondered whether I would be next in line,” she said to Shen Yun.

In 2015, Yu Liang decided to leave communist China. She was an expert pipa player and eventually joined the Shen Yun orchestra. While touring the world, Yu’s mind journeys back to her home in China, a place where she isn’t able to perform since Beijing has banned Shen Yun in the country. She feels that the communist brutality has lasted far too long and should have ended by now.

But in order for that to happen, Yu Liang might have to wait a bit more, at least until the people of communist China themselves decided to oust the communist regime once and for all. More than 4,300 Falun Gong practitioners are confirmed to have been killed by Beijing, with thousands more jailed and tortured. Many adherents were also subjects of forced organ harvesting by the Chinese regime.