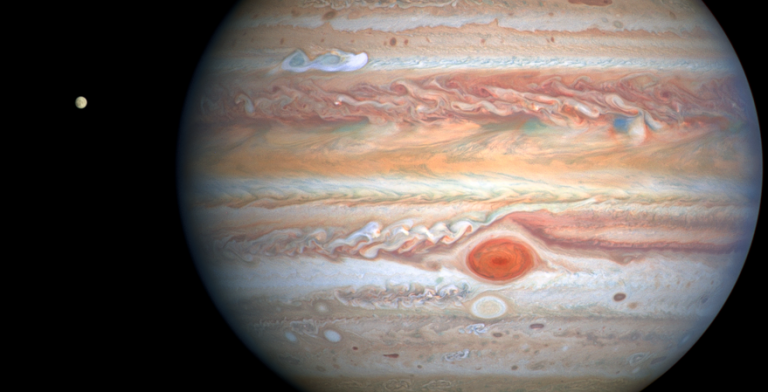 This latest image of Jupiter, taken by NASA’s Hubble Space Telescope on Aug. 25, 2020, was captured when the planet was 406 million miles from Earth. (Image: A. Simon (Goddard Space Flight Center), M.H. Wong (University of California, Berkeley), and the OPAL team via NASA / ESA / STScI)

This latest image of Jupiter’s storms, taken by NASA’s Hubble Space Telescope on Aug. 25, 2020, was captured when the planet was 406 million miles from Earth. Hubble’s sharp view is giving researchers an updated weather report on the monster planet’s turbulent atmosphere, including a remarkable new storm brewing, and a cousin of the famous Great Red Spot region gearing up to change color — again.

A unique and exciting detail of Hubble’s snapshot appears at mid-northern latitudes as a bright, white, stretched-out storm traveling around the planet at 350 miles per hour (560 kilometers per hour). This single plume erupted on Aug. 18, 2020 — and ground-based observers have discovered two more that appeared later at the same latitude.

Jupiter’s storms pop up every six years or so

While it’s common for Jupiter’s storms to pop up in this region every six years or so, often with multiple storms at once, the timing of the Hubble observations is perfect for showing the structure in the wake of the disturbance during the early stages of its evolution. Trailing behind the plume are small, rounded features with complex “red, white, and blue” colors in Hubble’s ultraviolet, visible, and near-infrared light image. Such discrete features typically dissipate on Jupiter, leaving behind only changes in cloud colors and wind speeds, but a similar storm on Saturn led to a long-lasting vortex. The differences in the aftermaths of Saturn’s and Jupiter’s storms may be related to the contrasting water abundances in their atmospheres, since water vapor may govern the massive amount of stored-up energy that can be released by these storm eruptions.

Hubble shows the greatest of Jupiter’s storms, the Great Red Spot, rolling counterclockwise in the planet’s southern hemisphere, is plowing into the clouds ahead of it, forming a cascade of white and beige ribbons. The Great Red Spot is currently an exceptionally rich red color, with its core and outermost band appearing deeper red.

Researchers say the Great Red Spot now measures about 9,800 miles across, big enough to swallow Earth. The super-storm is still shrinking as noted in telescopic observations dating back to 1930, but the reason for its dwindling size is a complete mystery.

Another feature researchers are noticing has changed is Oval BA, nicknamed by astronomers as Red Spot Jr., which appears just below the Great Red Spot in this image. For the past few years, Red Spot Jr. has been fading in color to its original shade of white after appearing red in 2006. However, now the core of this storm appears to be darkening slightly. This could hint that Red Spot Jr. is on its way to turning to a color more similar to its cousin once again.

Hubble’s image shows that Jupiter is clearing out its higher altitude white clouds, especially along the planet’s equator, where an orangish hydrocarbon smog wraps around it.

The icy moon Europa, thought to hold potential ingredients for life, is visible to the left of the gas giant.

This Hubble image is part of yearly maps of the entire planet taken as part of the Outer Planets Atmospheres Legacy program, or OPAL. The program provides annual Hubble global views of the outer planets to look for changes in their storms, winds, and clouds.