Transforming King Wen of Chu Into a Powerful Leader 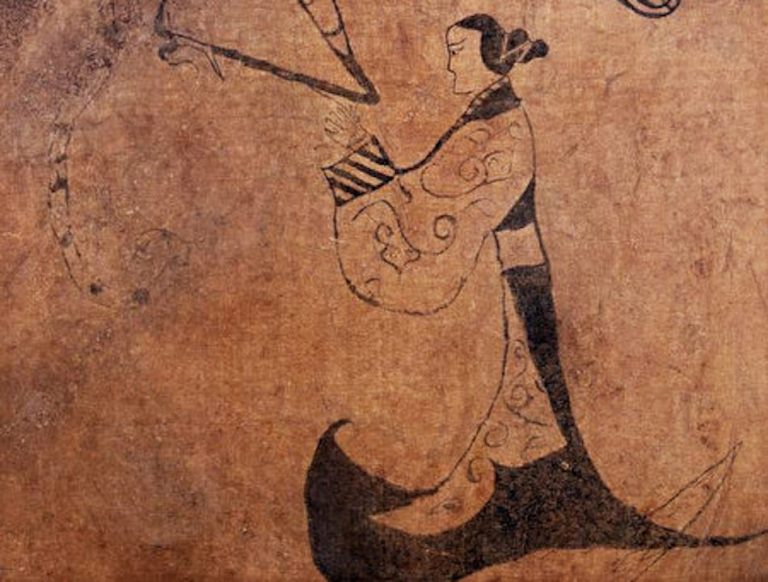 A silk painting of figures of a dragon and phoenix during the Warring States Period in the Hunan Provincial Museum. (Image: via Public Domain)

Many stories were passed down from the Spring and Autumn Period of the Zhou Dynasty (770-476 B.C). One of the most famous stories was about Bian He offering a piece of precious jade to the King. After offering the jade unsuccessfully to the first two kings, the third, King Wen of Chu (689-677 B.C.) finally accepted the jade stone. It was carved into the precious Heshi Jade disc. Another story was told about King Wen of Chu. Before he turned from being a playboy into a powerful leader, he had to endure severe lessons.

It was recounted that Xiong Zi, King Wen of Chu, got a good hound dog, a bow, and arrows. He took them to Yunmengze to go hunting. The hound was called Ru Huang, which means very fierce; the bow and arrow were made of bamboo called Wan Lu. King Wen left for three months. He indulged himself with beautiful women in Dan and ignored national affairs for one year. The government floundered.

Tai Bao Shen said: “The previous king got a sign from the divine and nominated me as Tai Bao. The Oracle was a good sign. Your Majesty, you took Ru Huan and Wan Lu and went hunting for three months. You took beautiful women from Dan to be companions and deserted national affairs for one year. You are guilty and should be whipped.”

Tai Bao was an official in the Zhou Dynasty. Tai bao was responsible for the supervision and education of young princes. The original intention of Tai Bao was to ensure that the crown prince and the Emperor studied morality. Shen was from the Kingdom Shen. When King Wen was young, his father, King Wu of Chu, invited Shen to visit Chu and educate its princes.

King Wen, who always respected Tai Bao, said: “I was already a prince when I was born. I hope you can change your punishments. Do not whip me.”

Shen spread a mat and asked King Wen to lie on it facing down. Shen bundled fifty thin sticks together. He kneeled down and put them on the back of King Wen. He picked them up and then put them back on twice more. He told the King: “Your Majesty, please get up!”

King Chu said: “Accepting a whipping should be worthy of the name. Please beat me!”

Shen said: “I heard that an honorable man would feel shame being beaten: a small person only feels the pain of the flesh being beaten. If one cannot correct the behavior with the same, what is the use of feeling the pain?”

After saying it, Shen left quickly. He thought that he had offended the monarch, and he was already guilty of death. He exiled himself to a riverside and asked King Wen to put him to death. King Wen said: “This is my fault. What crimes do you apply for?”

After that King Wen repented. He recalled Shen, killed Ru Huang, broke the Wan Lu, and dismissed all the beautiful women. From then on, he became diligent in ruling the country.

The previous King of Chu, King Wu, engaged in extensive warfare. King Wu had a mighty army, which was passed on to King Wen. King Wen led his army to open up new territories. He was at war at the borders for a long time. National affairs were well handled by officials.

King Wen acquired 39 small countries. He established the county system. He moved the capital to Ying and became a powerful king with great success. Lu Shi Chunqiu commented that the success of Chu’s territory was due to the power of Shen’s interventions. His direct advice to King Wen laid the foundation for the Kingdom of Chu.