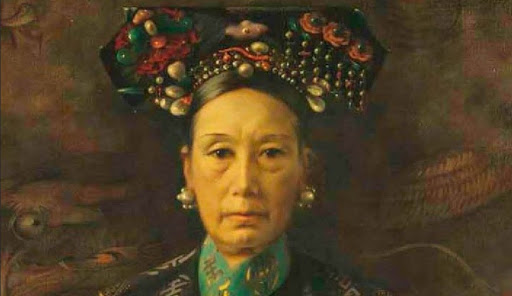 Cixi Taihou, known better as Empress Dowager Cixi, ruled China for 47 years between 1861 and 1908. Hailing from the Manchu Yehe Nara clan, she was selected as Emperor Xianfeng’s concubine during adolescence and grew up to be the most powerful person in China.

After Cixi entered the palace as a concubine, her status was initially low. However, this soon changed in 1856 when she gave birth to the Emperor’s only son Zaichun. After Emperor Xianfeng died, her 6-year-old son was crowned the new Emperor and the affairs of the kingdom went to a council of 8 elder officials. Cixi did not trust these officials and engineered a coup a few months later with Emperor Xianfeng’s former senior consort Ci’an and Xianfeng’s brother Gong. As a result, Cixi and Ci’an became the new regents, with Gong as the new prince’s counselor.

Over the next few years, the new rule crushed the Taiping Rebellion (1850 to 1864) and the Nian Rebellion (1853 to 1868), thus bringing a period of calmness and stability to China. There was an attempt to end government corruption and to hire people of talent. The military underwent a change, with Cixi’s rule creating the first-ever foreign service office in China. Military arsenals in the Western style were constructed. Schools for studying foreign languages were set up. In 1907, Cixi passed a law called “Regulation for Women’s Education” that mandated women should be educated. Many females were given scholarships to go abroad. She also banned several brutal practices that were prevalent in the country, including “death by a thousand cuts.”

The governors during Cixi’s rule were divided into two camps — one that completely opposed Westerners and another that wanted to modernize the country so as to avoid submitting to the West. Cixi belonged to the latter camp, which is why she implemented several modernization measures. However, she was also mindful of not harming local sentiments. “She took nearly 20 years to allow the complete construction of a railroad because she did not want to disturb ancestral tombs that lay near the proposed line. She did not want to promote textile factories because they took work away from Chinese women. She also knew there was much opposition to reform among the people, from commoners to civil servants to nobles, who detested so-called barbarian Western customs,” according to National Geographic.

When the Western armies, together with Japan, invaded China following the Boxer Rebellion (1899 to 1901), Cixi supported the Boxer groups against the invading armies. However, the Chinese side ended up suffering a humiliating loss following and Cixi had to implement reforms to convert China into a constitutional monarchy. She died in 1908, stamping her name as the longest-ruling woman in Chinese history.

The palace not only had the Imperial Kitchen but also a special kitchen dedicated exclusively to cater to Cixi’s tastes. Known as the “Western Kitchen,” this was divided into multiple areas — vegetarian, bun, meat, rice, noodle, pastry, and snack section. The staff was said to be capable of making up to 4,000 different dishes. As to her eating habits, shewas supposedly served 120 dishes per meal, of which she only took a bite or two because of fears that she might be poisoned.

Cixi was known to be a workaholic, waking up before 5 a.m. every morning and working all through the day right until late at night. Even while sick, she is known to have worked tirelessly. After her death, her remains were ravaged by robbers who bombed her tomb and stole jewels from her coffin. Her tomb was only restored in 1949 and still stands today in Zunhua.