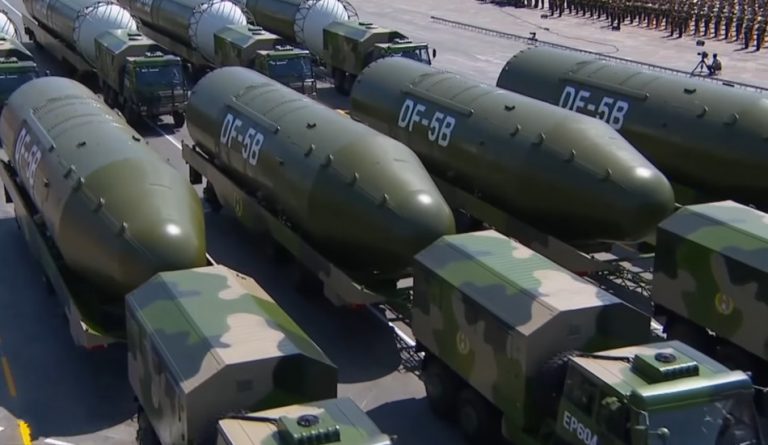 A new report by the U.S. Defense Department has warned that China will be doubling its nuclear warheads over the next 10 years. (Image: Screenshot / YouTube)

A new report by the U.S. Defense Department has warned that China will be doubling its nuclear warheads and boosting its nuclear capabilities over the next 10 years while also expanding the various ways of deploying those weapons. The report, titled “Military and Security Developments Involving the People’s Republic of China — 2020,” was presented to Congress.

The report estimates that China has nuclear warheads numbering in the low-200s. This is the first time the U.S. military has disclosed the figure publicly, indicating that the Pentagon is now looking at the Chinese military as a serious threat. Previous estimates from The Federation of American Scientists had put China’s warheads at 320. The report expects China to up its nuclear warhead stockpile to around 400 within the next decade. This is based on the assumption that the Chinese regime will be able to secure enough material to create new nuclear weapons without having to produce fresh fissile material, thus increasing its nuclear capabilities.

Early this year, the Chinese state-backed media outlet Global Times reported that the country needs to have 1,000 nuclear warheads in a short period of time, which would mean a five-fold increase in its estimated weapon stockpile. Plus, Beijing is said to be inching closer to an operational nuclear triad, which refers to the ability of a military to launch nuclear weapons from land, air, or sea. In addition to improving its sea-based and ground-based nuclear capabilities, China is improving its Air-Launched Ballistic Missiles (ALBMs) capable of delivering nuclear warheads. In October last year, China revealed its H-6N bomber, the country’s first air-to-air nuclear-capable refueling bomber.

China’s growing nuclear capabilities have raised calls for the country to be a part of the New START, a nuclear arms treaty that is set to expire in February next year. The U.S. government has consistently requested China to be a part of the negotiations. However, the Chinese side wants Washington to cut back on its nuclear arsenal to the level of China before they agree to any such negotiations. The Federation of American Scientists calculates that America and Russia have 3,800 and 4,300 nuclear weapons respectively.

Deputy Assistant Secretary of Defense for China Chad L. Sbragia notes that the PLA aims to develop a “world-class military” by the year 2050.

“The Chinese do have … an aspiration for great power status by virtually every measure of comprehensive or composite national power that you can measure… To achieve that, it means that they have to have … global convergence at the broadest scale possible. For the PLA, that means that they do have the intent to go out. I think that’s certainly one of the aspects of what ‘world-class military’ means … the capacity to have influence at distance, at a time and place of their choosing. They certainly aspire to do that,” Sbragia said in a statement.

Last year, the PLA expanded its participation in military exercises with other nations. Beijing is also trying to normalize its overseas military presence. At present, China has an international military base in Djibouti. Beijing is said to be considering setting up military logistics facilities in countries like Thailand, Pakistan, the UAE, Kenya, Angola, Tanzania, and so on. A worldwide PLA military network could allow the Chinese to interfere with American military operations as well as provide support for offensive military activities against the U.S.